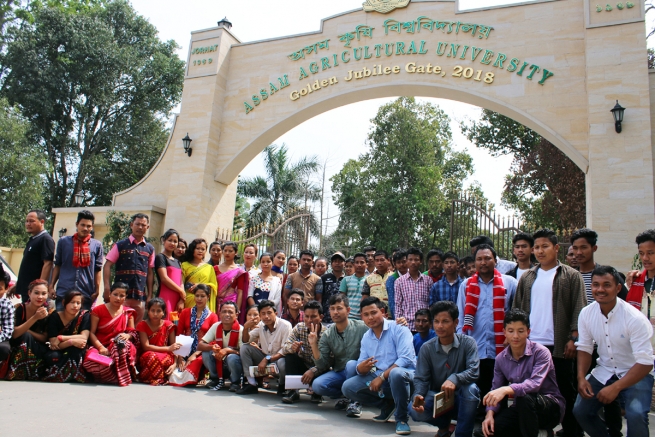 (ANS - Jorhat) - Educating young people, especially those most at risk of social marginalization, according to the Salesian perspective means equipping them with the tools to develop as human beings and citizens, both spiritually and professionally. This is why from 5 to 8 April, 75 young Mising indigenous people took part in a training course promoted by the Institute for Culture and Rural Development (I-CARD), founded and directed by Salesian Fr K.A. Thomas, who contemplated both dimensions.

The young people, from the districts of Golaghat, Sivasagar, Majuli, Dibrugarh, Charaideo, Lakhimpur and Dhemaji, in the Indian state of Assam, attended an introductory session led by two officials of the “Gas Authority of India"- Puspalata Kardong and Bipul Taid - who spoke to the children about the need to have a positive outlook on life, to listen to their inner life and to cultivate spirituality. "Give prayer a chance" the two interlocutors recommended.

In the morning of the following day, after a moment of meditation and another of social work, the whole group reached the Agricultural University of Assam, where they attended a lesson/laboratory session, both theoretical and practical, on raising pigs, in which the effectiveness and value of integrated breeding of pigs, fish and poultry was emphasized.

In the afternoon, at the I-CARD facilities, formation continued through a session on government schemes and projects on pig breeding. In this phase, Fr K.A. Thomas was also able to illustrate to the young indigenous people the Japanese technique "Bokashi" used at the institute's farm, which combines productivity and respect for nature, while also improving the quality of the air.

On the third day, the participants in the training course worked on various activities of public utility within the I-CARD campus, and then, in the last two sessions, completed technical training in pig breeding - discovering how to prevent diseases among pigs, which drugs to give them - and receiving valuable information on their own individual health and hygiene as well as on the rights of each person.

On this last occasion, Fr K.A. Thomas focused mainly on domestic violence and insisted that young people should proceed with courage and determination to stop these abuses and give dignity to all members of their tribes.

During the course, each evening was animated by lively presentations and cultural programs to which all participants joined with joy. "It was more a party than a training course," one of the young participants said. And in fact, even some young people who had initially come to participate for just one day, then attended the entire course.

At the end of the last session the young students were awarded their graduate certificates.