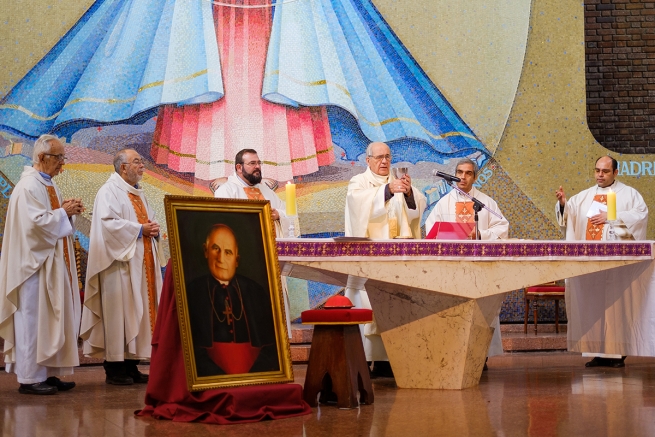 (ANS - Santiago) - One hundred people belonging to the educational community of the Silva Henríquez Catholic University (UCSH) gathered to commemorate the twentieth anniversary of the death of Salesian cardinal Silva Henríquez, with a Eucharist celebrated in the temple of Mary Help of Christians of Lo Cañas, in Santiago, on the morning of Tuesday 9 April. The Eucharist was presided over by the President of the "Cardinal Raúl Silva Henríquez" foundation, Msgr. Camilo Vial, and concelebrated by the Provincial of the Salesians in Chile, Fr Carlo Lira, and by the Rector of the UCSH, Fr Galvarino Jofré.

During the homily, Fr Lira spoke about the figure of the good shepherd and how Cardinal Silva Henríquez knew the Salesian charism and Don Bosco. "Because if there is one thing that Cardinal Raúl has taught us is that between word and action there must be no difference: we are called to collect this heritage to serve man in all his dimensions, and above all those who live in urgent need. The young are the raison d'être of this institution, and have occupied a priority place in the life of Fr Raúl, as a person, as a Salesian and as a pastor."

Taking place after the Eucharist was the inauguration ceremony of the campus of Lo Cañas, work jointly completed by the Salesian Province and by the UCSH. The campus now has new classrooms, laboratories and equipment and in 2019 it welcomes 300 new students in phono-audiology, kinesiology and nursing courses.

During the ceremony, Fr Lira addressed the audience, saying: "This shows that the university is not a mere appendage to the Congregation, because it is its university, and we are planning the Salesian mission strongly in this university field."

He then added: "We have proposed ourselves to challenge this institution to achieve the objectives that a Salesian university in Chile should have: to be a reference point for youth in pedagogical thought, and in human development."

For his part, Fr Jofré said: "A dream becomes reality, placing at the service of the new generations of students a privileged space, which for years has served for the philosophical and theological formation of the Salesians. The Province demonstrates its commitment to the UCSH by offering it one of its best spaces."

The celebration ended with the blessing of the structures, the cutting of the ribbon and the opening of the doors by the students present.