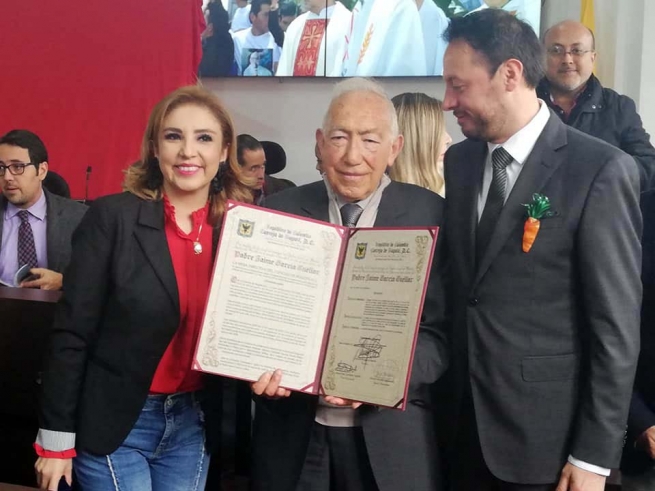 (ANS - Bogotá) - “Young people want to be understood, educated and accompanied in their process of cultural, work and professional growth. This is what we offer to those historically ignored: the poorest in Bogotá.” Thus stated Fr Jaime García, SDB, in receiving the first "Civil Order of Merit Javier de Nicoló" awarded by the Bogotá Municipal Council.

Fr Javier (Saverio) de Nicoló, a Salesian priest and missionary, founder of the District Institute for the Protection of Childhood and Youth (IDIPRON), remembered throughout the city and the country for his work with disadvantaged children and young people, would have said the same thing. "Together we finished the baccalaureate and ventured into priestly formation. Javier was a star of God for the smallest of Colombia," said Fr García during the ceremony in which he received the medal bearing the name of his friend and confrere.

This new Civil Order of Merit is the result of a decision by the Bogotá Municipal Council to honor the memory of a priest who has worked for over 40 years for the rights and well-being of children and young people, and designed to give recognition to those who dedicate themselves to this same sector.

Thus to the first awarding of the recognition - carried out on the occasion of the third anniversary of the death of Fr de Nicolò - among the honored is Fr Jaime García, thanks to his work at the “Juan Bosco”, where over 8,000 students have grown, thanks to non-formal education, art schools and sport. The motivation reads: "At the age of 88, Fr Jaime Garcia Cuéllar continues to work in favor of the whole youth community in a situation of high vulnerability, and continues to change the lives of thousands of young people with scarce resources."

The award assigned to Fr García also encouraged the memory of Fr de Nicoló, who in his life helped about 80,000 young people throughout the country in social reintegration processes and who, although he died in 2016, is still alive in the memory of many.

Today the footsteps of this great Salesian are retraced by other spiritual Sons of Don Bosco and by co-responsible laity in the mission. "Now we want to continue working under the care of his heir, Fr Jaime García," said Alexis Vidal, of the project "Circus Juan Bosco Obrero", a group of young people born in the Salesian center of Fr García, which educates young people to circus arts.