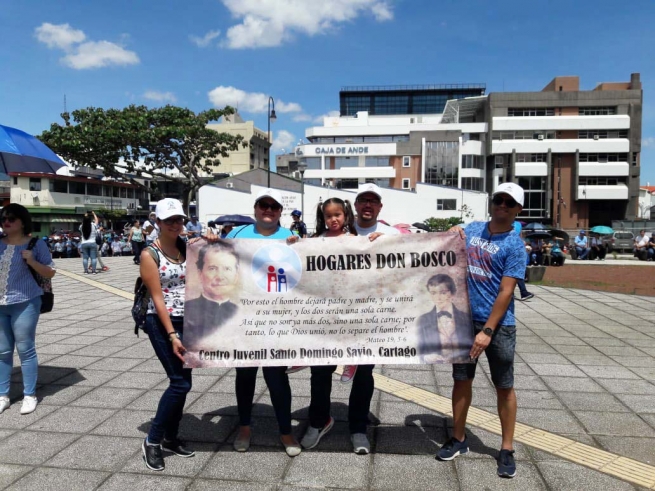 (ANS - Cartago) - An ecclesial movement of married couples and family apostolate, with a strong Salesian spirituality, is taking hold in Central America, as an option of hope to save and strengthen families. What was born simply as a possibility of accompaniment and formation for the parents of the young people who attended the “Santo Domingo Savio” Salesian center in Cartago, Costa Rica, has instead become the gateway through which the “Hogares Don Bosco Movement”(HDB) is expanding today in the Central American region.

In 2015, the married couple Alejandro Loría and Priscilla Bogarín, two Costa Rican Salesian Cooperators, was called to the Salesian Center "Santo Domingo Savio" of Cartago to start the Family Pastoral. After an arduous research on the different options present in the Salesian Family, they learned about the experience of the "Hogares Don Bosco" (Don Bosco Houses) born in Spain, and found therein a movement that brought together all the features they had been seeking in a Family Pastoral in Salesian spirituality. In fact, HDBs offer a concrete option for all those who have experienced a Salesian spirituality and wish to maintain it within the vocation to marriage to which they have been called.

"When we accepted the adventure of forming a group of 'Hogares Don Bosco' in Costa Rica, we thought only of offering a space of growth for the families of the young people who attend the Salesian center, in order to support the work that the groups do with children, but in the HDB we have found an answer to our concerns of growth as spouses, as parents, as adult co-workers of the Kingdom of God, called to a daily life of holiness," said Priscila. And this is how they immediately contacted the National HDB Commission of Spain, in the persons of the married couple Cristóbal Marín and Irene Blaya.

The HDB Movement was born in 1965 in Spain, thanks to several Salesian Cooperators. Today the HDBs welcome all those couples who, by freely accepting the underlying ideal and respecting its norms and guidelines, want to undertake a serious journey of human and Christian growth.

In Central America, from the foundation of the first group in Cartago, in October 2017, until today, the current members have traveled a challenging path and have had the full support of many members of the Salesian Family, including Fr Ángel Prado, Salesian Provincial of Central America (CAM), and Fr Javier Rivas, his Vicar.

Their experience was also shared by the Delegate of the Rector Major for the Salesian Family, Fr Eusebio Muñoz, SDB, during the recent IV Central American Meeting of the Salesian Family: "We invite you to recognize the richness that exists in 'Hogares Don Bosco'. We wish to reach as many families as we can and place them under the protection of our Mother Help of Christians." he said on that occasion.