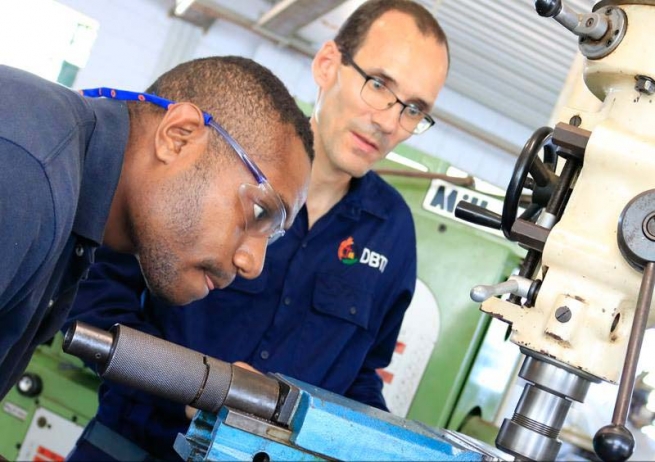 (ANS – Gabutu) – “Two elements from my childhood urged me towards becoming a missionary. One was my dad. Before he got married, he worked four years as a builder-foreman in Ghana, Africa. His stories and pictures fascinated me very much. Second, as a young adult I had an accident in the sea. I was caught in a current and almost drowned. Only through God’s grace was I saved. I received a second life. I saw it as a call from God for some specific mission for me. This was also the time I was woken up from an over-protected life in my family and left without any clear direction in life.” Speaking is Reto Wanner, Salesian missionary from Switzerland into Papua New Guinea.

“Not long after the accident I came to know that the Salesians in Papua New Guinea needed an instructor in mechanics. I had the required background of mechanical engineering. I offered my services through a Swiss volunteer organization. I stayed three years in the Don Bosco Technological Institute at Port Moresby, the capital of Papua New Guinea. Very soon I came to realize that sharing only my engineering knowledge and professional skills was not enough. The accompaniment of the young people became more and more important to me. My role models were many Salesians, Daughters of Mary Help of Christians (FMA) and the aspirants among whom I worked.

I returned to Switzerland and began to work as a project leader in a metal fabrication company. I felt unsatisfied. I missed the young people. I was no longer interested in making a career, looking only for my own benefit and wellbeing. I turned once again to the Salesians. In spite of not being a Catholic, I was allowed to start my aspirantate. I became a Catholic. Already in the novitiate I felt the vocation to become a lay brother – to be with the young people in the workshop, class room, dormitories. The good Lord guided me further towards this. The missionary experience I had had accompanied me all through my formation.

After making my final vows Fr. Provincial, Josef Grünner, allowed me to return temporarily to PNG.

There my wish to become a missionary intensified so much that, in 2016, I followed the call of the Rector Major to be a missionary ad vitam. And again, the good Lord let me go back to PNG.

I am assigned for five years to Don Bosco Technological Institute – the same institute where I had been as a volunteer. My main task is technical education in the machine fitting and welding trade. A good change from this demanding work as an educator-pastor is the Sunday oratory. Sharing my life with the less privileged children and youths from our neighbouring villages gives me great fulfilment and strengthens my identity as a missionary.

I am very happy to be a Salesian lay Brother. I am fully immersed among young people – in the classroom, in the workshop and in the Oratory. After class I spend time with the students and children. Through this intense togetherness a relationship of trust and love has emerged. The young people’s confidence in me has grown. They open up. They get interested in my life as a religious. So, I get opportunities to share with them my Christian values and promote good behaviour, respect, dignity, love, etc. A holistic formation is taking place, which will last far beyond our time together.

Looking back, I think what is most essential for a missionary is to be open and humble. Had I not listened to God and let myself be guided by the Holy Spirit, I would not have become a Salesian, a brother, a missionary”.