Sierra Leone - The story of Musu and baby "Juan Bosco" 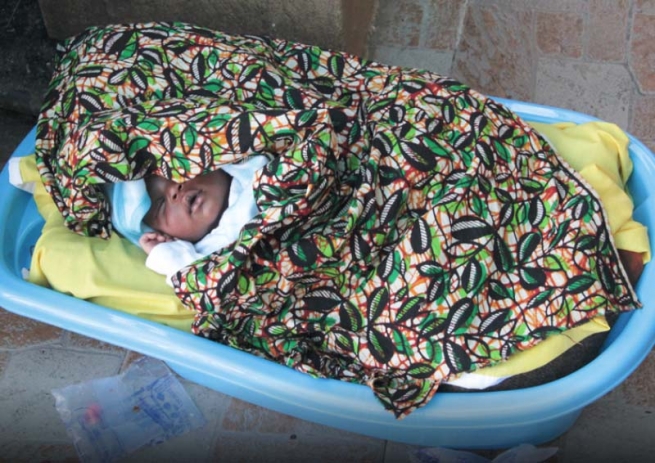 (ANS - Freetown) - Musu was a child when the Salesian missionary Fr Jorge Crisafulli found her on the street under a table in the center of Freetown. It was raining heavily and it was cold for those used to tropical heat. "What's your name?" he asked her. "Are you sick?" Her sad eyes and the pain in her face announced deeper pains than just physical ones. She coughed unceasingly. Fr Crisafulli put his hand on her forehead and noticed that it was burning with fever. That was the beginning of a great story of hope.

Little Musu told him that she had gone to the hospital, but not having 15,000 leones (about 1.5 euros) to enter, she had not been treated. "I will take you to the hospital immediately," said the Salesian; but at that moment Musu turned to look for something beside her and put a helpless, skeletal, almost dying, nameless baby boy in the hands of the cleric.

Fr Crisafulli accompanied Musu to the General Hospital, where she was diagnosed with tuberculosis and pneumonia. As for the child, since they did not have the means to treat him there, he took him to the "Cottage Hospital", where he was found with tuberculosis, dehydration and malnutrition. When the doctor asked for a name to register the child in the health center, the Salesian missionary did not hesitate for a moment: "His name is Juan Bosco, Juanito Bosco".

When he returned to the General Hospital he assured Musu that the child was well and would survive. Fr Crisafulli also had to tell her that he had been asked the name of the child to be able to register him in the hospital and that he had given him the name Juan Bosco.

Musu changed her expression and seemed annoyed. The Salesian asked her if she did not like the name Juan Bosco and she replied, "you should have given him your name: Jorge Crisafulli!"

Today, Musu and Juan Bosco are in good health. Both have overcome their problems. Musu is now 18 years old, studies as a hairdresser and sells sandals, while little Juan Bosco is a healthy and smiling boy, who honors his name, runs everywhere and is a sign of resistance, survival and hope in the face of adversity.

Musu and Juan Bosco are two of the many success stories of the work that the Salesians carry out in Sierra Leone and in many countries of the world to take children off the streets and offer them an education.