El Salvador - Supporting the education of young people with scholarships 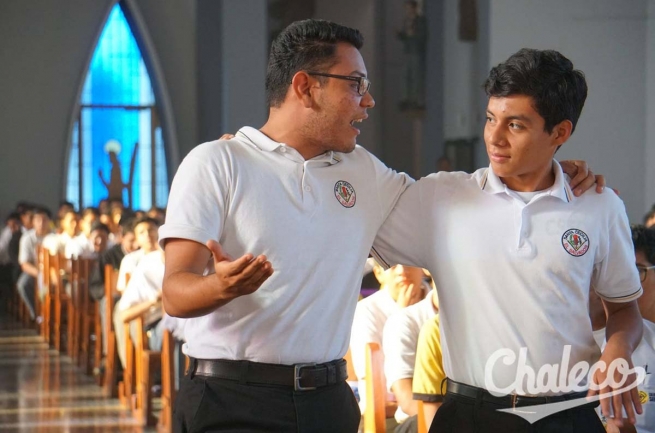 (ANS - Santa Tecla) - Cesar Adalberto Acosta Barrera is an 18-year-old boy who was able to study, received a good education and now has a bright future ahead of him. But all this was not obvious. His education was provided by a scholarship program carried out by the Salesian High School "Santa Cecilia" of Santa Tecla, in El Salvador, funded by the Salesian Mission Office of New Rochelle, in the United States. Only last year the Mission Office funded 14 other boys like him.

Cesar Adalberto started attending the oratory attached to the school in 2014 when he was in 7th grade. He says, “I started going to the oratory thanks to a friend. He explained that it was a place where I could practice soccer and attend mass every Sunday. I thought this was excellent because I could play soccer and get closer to God. I enjoyed each reflection that the Father made at the oratory and each soccer game I played, in addition to all the friends I made.”

Because of Barrera’s attendance at the oratory, he was approached by the parish priest and asked if he would like to study at Saint Cecilia Salesian High School. He immediately said yes and was awarded a scholarship. Barrera notes, “Every time I saw the school from the outside, it seemed like an incredible place and the thought of studying there made me very happy.”

In 2015, he started the 8th grade with scholarship funding. Reflecting on his first day of school Barrera says, “I remember I was very nervous the first day of class – I didn’t know anybody – and then I discovered the Salesian charisma that resides there. Both students and teachers made me feel like the school was my second home. Thanks to this opportunity, I have been able to grow in many aspects of my life, both in the academic and spiritual aspect.”

Barrera adds, “As a student in school I have become a person who has acquired the knowledge of a secondary education, in addition to developing important skills such as teamwork, communication and leadership. I have now finished my second year of technical high school studies in electromechanics. Thanks to the scholarship that the school gave me I have had the opportunity to receive a better academic and Christian education, which will allow me to have even more opportunities in the future.”

Salesian missionaries in El Salvador provide social development services and primary, secondary and vocational education as well as university degree programs to aid youth in breaking the cycle of poverty and contributing back to their families and communities.

Close to 35 percent of El Salvador’s population lives in poverty, according to the World Bank. Youth in El Salvador are confronted not only with poverty, but with instability, high levels of violence and inadequate access to educational opportunities. Despite ranking high for economic indicators, the need for practical education in the country is more important than ever with 12 percent of youth ages 15 to 24 unemployed and 41 percent underemployed.