Morocco – Rector Major in Kenitra: "let us try to work together for the happiness of young people" 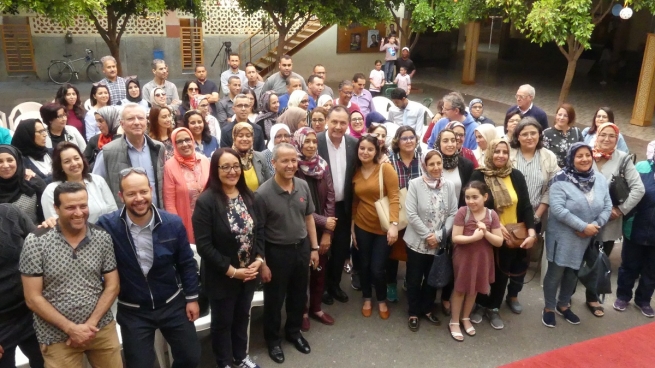 (ANS - Kenitra) - The second day of his visit to the Salesian presence in Morocco yesterday, Thursday 2 May, the Rector Major spent entirely at the Kenitra house to learn in detail the reality of the schools run by the Salesians.

The X Successor of Don Bosco was first of all welcomed by the children and by the educational community of the Don Bosco Primary School, founded in 1937 with 14 foreign students and which today forms 700 students. "Don Bosco is known and loved in Kenitra. Teachers and parents are proud of a pedagogy that loves and respects students," said the director of the Salesian center, Fr José Antonio Vega.

One of the parents' representatives then spoke of how they see their children flourish "in this garden that Don Bosco prepared, and where he sowed seeds of love, family spirit and solidarity, and where trust and tolerance prevail."

One of the students also shared his thoughts: "Every morning I wake up ready to learn new lessons and to live new experiences, and above all, to live important values. If all the schools teach their students various subjects, the Don Bosco School has taught me values that will contribute a lot to my development. (...) The School of Don Bosco is for many of us a second family, and we are proud to be a part of it."

After attending numerous performances of dance, song and poetry of and by the children, the visit continued at the Don Bosco Institute, which in October 2008 started its first two classes and now counts 260 students. Welcomed by the children, the educational team and by past pupils with greetings and songs in French, Spanish and English, the Rector Major was able to make a journey through the cultural traditions of different countries of the world.

The visit continued at the “JUK-SPEL” center, the vocational training school established first as an association (Joyeuse Union Kenitra - JUK) which organized sports and cultural activities for Jewish, Muslim and Christian citizens, and later became a vocational center with the addition of the Electrical section (Section Professionnelle Electricité - SPEL). Today the center educates and starts 160 young people into the labor market and also organizes short courses, such as the one currently underway in Renewable Energy for another 60 students.

To all these children, and to the girls trained in the adjacent Female Formation Center (JUK-CFF), the Rector Major recalled that they are at the center of every Salesian educational project: "You are in the first place!"

The day ended with time reserved and dedicated, respectively, to the teachers and parents of the students, during which Fr Á.F. Artime thanked everyone for their service and trust and renewed the invitation to an educational alliance between all the actors involved: "Let us try to work together for the happiness of young people."