Morocco - End of Rector Major's Animation Visit to Kenitra: a testimony of fraternity 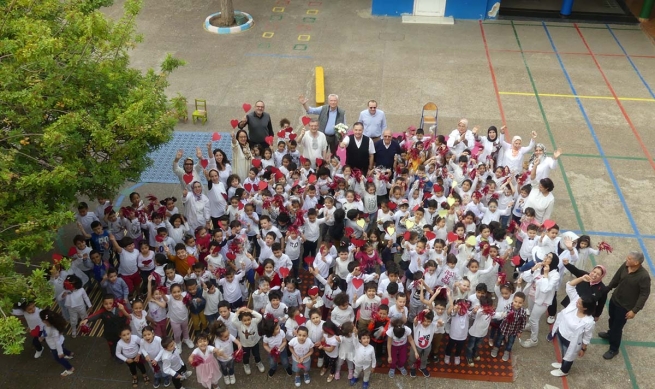 (ANS - Kenitra) - The Visit of the Rector Major, Fr Ángel Fernández Artime, to the Salesian house in Kenitra, Morocco, has ended. On Friday 3 May, in the morning, the X Successor of Don Bosco completed the scheduled activities by going to the nursery school of the Institute of the Holy Family and the Female Vocational Training Center "JUK-CFF".

Upon his arrival at the Institute of the Holy Family, the Successor of Don Bosco was welcomed in a festive atmosphere, in the specially decorated courtyard, by many children from the nursery school, accompanied by the educational team. The festivities began first with a song that raised a message of human brotherhood, beyond the differences, among all "the children of the earth"; then greetings were made to Fr Á.F. Artime, pronounced by the school director, Ms Jamila Jaber, and a pupil of the institute.

After posing for all the photos with the children and school staff, Fr Á.F. Artime went to the JUK-CFF vocational training workshops for young women. Welcomed by the Director, Loubna Rakib, the Rector Major was honored with an Arabic song prepared by the young women in formation.

For his part, he responded by encouraging them to continue their studies in childcare professions; he then attended the graduation ceremony for students who'd completed the last year of courses, an event also attended by the President of the JUK, various civil authorities, representatives of international support organizations and the Secretary General of Catholic Education in Morocco (ECAM).

In the speech given for the occasion, Fr Á.F. Artime congratulated all the new graduates for the achieved diploma: "I see that you have come a long way," he said, thanking the entire educational team at the same time. He then shared his concern for the promotion of women's education worldwide; and after a moment of agape, the Rector Major concluded his visit and, accompanied by Msgr. Cristóbal López Romero SDB, archbishop of Rabat, went to the airport.

The involvement and availability of all those involved in this visit has allowed to give a strong testimony of the possibility of living together, despite any cultural and religious differences. Because "Don Bosco takes care of cultures, takes nothing away, does not destroy," as one woman said during a dialogue with the Rector Major.