Ethiopia - Food support for Abeba and her sisters 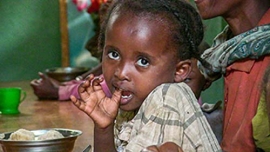 (ANS - Dilla) - Abeba is 8 years old and lives in a small sheet metal house in Dilla, together with her mother and three younger sisters. If it were not for the Salesians, not only would she not have an education, but her very existence would be at risk, because the economic condition of her family is so precarious that she and her sisters have the security of eating only at the school of Don Bosco's spiritual children. Today Abeba is happy because, having attended school, she can write her story with her own hands.

Abeba's mother occasionally works in a coffee field, like most Dilla adults. However, the scarcity of rainfall in the area in recent years has also led to fewer employment opportunities for her. Abeba's father, on the other hand, went to live in Addis Ababa, 350 km further north, to work. The two times he returned he brought his wife and daughters some money and some bags of legumes; but now he has been away a long time, so much so that he has not yet met his last daughter, Berhane, of almost two years.

At the Salesian school Abeba attends the same class as her sister, Tigist, who is 6 years old. While Tigist still struggles a bit, Abeba is happy to have learned to read and write, and so she shares: "We are happy to go to school, because we are with our friends and because they give us lunch and a snack and even if in the evening, at home, mother failed to prepare food, we have a full stomach. At school we eat teff and beans. Sometimes, eggs. Once for a snack, fruit juice - so good! In the courtyard there is a fountain, and we often argue with others to drink first, but then we immediately make peace."

The intervention of the Salesians in Dilla is a response to the lack of a healthy and regular diet for many, and also represents an example of a virtuous economy, as most of the food comes from Wallame, a town not far away, where the Salesians have another school and a center of agricultural production and breeding pigs: this is how the self-sufficiency of the food program develops and work is created for dozens of farmers.