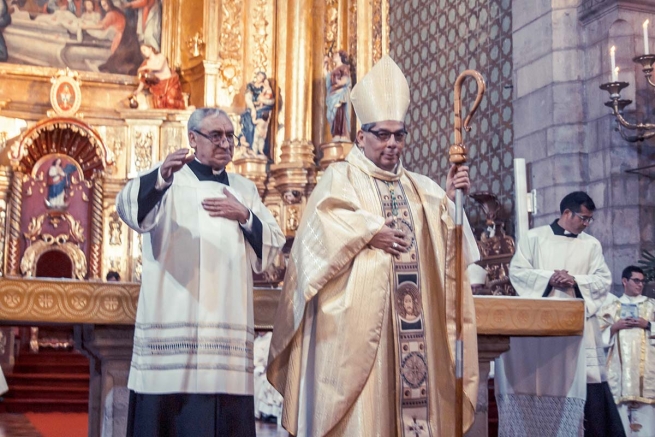 (ANS - Quito) – Taking place on 2 May, in a cathedral full of faithful, was the installation of Msgr. Alfredo Espinoza Mateus, SDB, as the new archbishop of Quito and Primate of Ecuador. During the ceremony, he wore a chasuble featuring the image of Jesus on the front and the face of Don Bosco on the back, thus showing his love for the Salesian vocation.

The rite, which began at 6.00 pm, was attended by Msgr. Andrés Carrascosa Coso, Apostolic Nuncio in Ecuador; Msgr. Fausto Trávez, outgoing archbishop; the Bishops of Ecuador; authorities of the National Government; various ecclesiastical authorities and over 250 priests from Quito, including several Salesians, such as Fr Francisco Sánchez, Provincial.

Also present were various groups of the Salesian Family who came from different parts of the country to accompany the Salesian bishop, who had been the head of the diocese of Loja for five years before arriving in Quito.

During the initial ceremony, Msgr. Carrascosa Coso read the decree of the nomination by Pope Francis; then Msgr. Espinoza issued the solemn profession of faith and the oath of allegiance before the entire assembly, and then signed the canonical installation.

This was the preamble to one of the most symbolic moments of the ceremony because shortly after, the Apostolic Nuncio, a few steps from the altar, handed over the pastoral care to the new archbishop of Quito, as a sign of his new pastoral office. Mons. Espinoza took possession of the Cathedral, while a strong ovation started from the assembly and many bishops approached to embrace him.

The reflection proposed by Msgr. Espinoza in the homily focused on the episcopal motto chosen: "I will make you fishers of men." The new archbishop of Quito said he arrived in the archdiocese with a great pastoral passion to make the "streets of Quito" his own, and that trust in God will allow him to raise and throw nets for abundant fishing.

"To this mission I want to invite you all. I replied, I have a clear idea of ​​the mission that the Lord places in my life, but it is not my mission, it is our mission. We must all throw the nets and be fishers of men," concluded Msgr. Espinoza amid the watchful eye of those present.

Another aspect of which he spoke is the urgency of a priestly ministry for which he committed himself to be close to priests as a father; to the priests, he asked for "fidelity, coherence, transparency of life, commitment, service, dedication, spiritual life and prayer, availability, obedience, but, above all, I hope that you are pastors, in the image of Good Shepherd who is Christ."

And on the fact of being Primate, he affirmed that it is a title that commits him to be the first servant of all, with an open heart and a preference for young people, because, as he has said many times, he is "bishop by obedience, but Salesian by vocation."