Honduras – "No to drugs": a current and necessary campaign 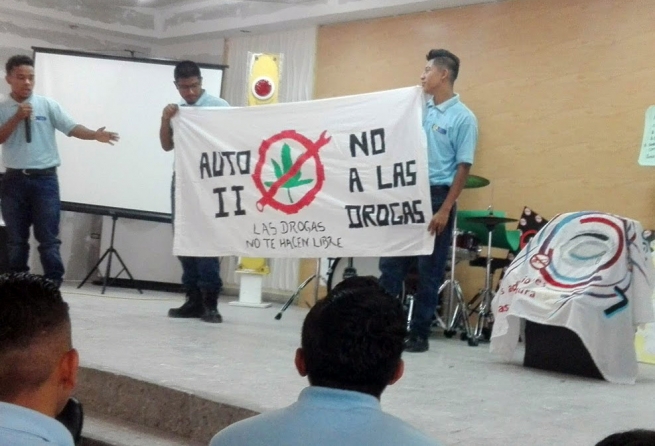 (ANS - Tegucigalpa) - According to a study by the Honduran Institute for the Prevention of Alcoholism, Drug Addiction and Pharmaceutical Drug Addiction (Ihadfa), drug use starts between the ages of eight and ten. Experts stress the importance of creating prevention processes in all environments but, above all, in the educational field. For this reason, over 200 students from the "San Juan Bosco" Vocational Training Center in Tegucigalpa have developed a drug prevention campaign.

A published survey shows that children indicate that among the reasons for the use of drugs at an early age are: "problems at home or school, sadness, worries and anger, feeling alone or misunderstood, mere curiosity or wanting to know what it feels like, wanting to appear popular and important or be accepted by a group," explains psychologist Sandra Paz. For these reasons it is necessary not only to carry out campaigns, but also to create educational processes that help adolescents and young people to become aware of this social problem.

In fact the groups of the "San Juan Bosco" Vocational Training Center, coming from different technical areas, have developed logos and slogans to raise public awareness on the harmful effects on health by drugs.

The "Networks" area wanted to convey the message of accompanying people and especially young people, because many revert to drugs because they seek attention, dialogue and communication they do not find at home. The group designed a logo with three raised hands and the slogan: "Yes, you can live without drugs."

The students of the area "Ceiling and Wall Installations" used the image of a traffic light and chose the motto: "With Christ in our hearts we will have a life without dependencies."

The students of "Graphic Design" called attention to the problem of addiction, which strongly affects families, and proposed the slogan: "a life without drugs can save lives."

The "Welding" students focused on the development of the motto: "Drugs do not make you free" and reflected on the theme of youthful weakness, of those who give in to peer pressure and let themselves be transported into the world of addictions .

The youths of of "Motorcycle Mechanics" presented the motto: "Leave your mark against drugs", while students of the "Automobile" course clearly summarized: "No to drugs, yes to life."

The other groups proposed titles like "Drugs disappear", "We say No to drugs 24/7", and "Drugs bind us like chains".

As experts point out, it is important to create prevention processes.