Italy – Feast of St Domenico Savio in Basilica of Lecce 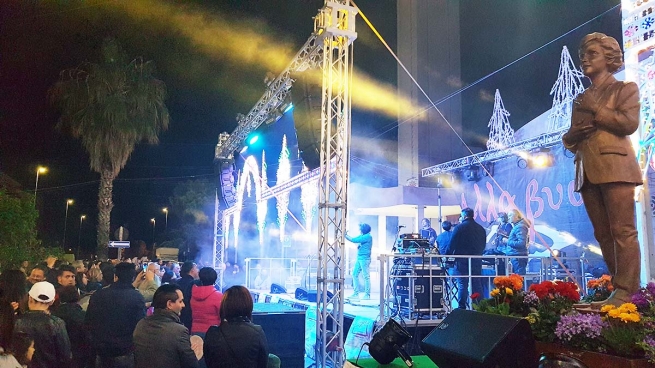 (ANS - Lecce) - On May 6 the whole Salesian Congregation commemorates that great model of youthful holiness that is Saint Domenico Savio. In Lecce, however, it is celebrated in a special way because in Lecce is the only basilica in the world dedicated to him. It is custodian to a relic of the saint and is a visible sign, for the Leccesi and for the Salesian Province of Southern Italy, of a proposal of authentic Christian life lived in the typical style of Domenico Savio: friendship with the Lord and joyful relationships with peers.

The basilica was built in the early 1970s to thank God for the miracles that occurred, thanks to the intercession of the saint, in Lecce and in Maglie, a town nearby. In these places, in 1950, two mothers who risked death invoked Domenico Savio and by his intercession obtained the grace of healing. It was thanks to the canonical recognition of these two miracles that the Church then formally approved the sanctity of this young man.

In these days many were the expressions of affection of the people of Lecce towards Domenico Savio. At the center was the Eucharist on May 6, presided by the Provincial of Southern Italy, Fr. Angelo Santorsola, who recalled that Domenico Savio is still today a model of life that is current, and that following his example it is possible to be credible witnesses of an enterprising youth.

The celebration then expressed itself in various other events: the "March" of Saint Domenico Savio, thanks to which the statue of the saint traveled several streets of the neighborhood; the festivities in the square, complete with a concert; a sharing of the "Family Dinner" for the whole local Salesian Family; the 30th Bicycle Run in the streets of Lecce; and the event "Savio's Got Talent", which highlighted the innumerable skills of the children and young participants.

Perhaps the most heartfelt initiative was "St. Domenico Savio and the gift of life", the prayer vigil held on Friday, May 3rd, together with mothers expecting a child, boyfriends and young spouses: an exchange of greetings via video, the spiritual communion that united in a twinning the Basilica of Saint Domenico Savio in Lecce with the Basilica of Mary Help of Christians of Turin-Valdocco.

The greatest miracle that Saint Domenico Savio continues to perform in Lecce is that, thanks to him, many young people can still have the opportunity to know the Lord and to say, like him: "I absolutely need to make myself a saint!"