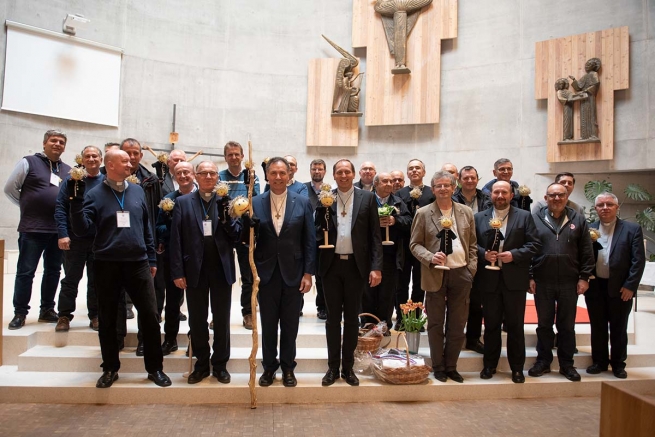 (ANS-Maribor) - On 8 May the Don Bosco Salesian Center of Maribor hosted for the second time Rector Major Fr Ángel Fernández Artime, currently participating in the Meeting of Provincials of the Central and Northern Europe Region in Veržej from 7 to 10 May.

The choir of the young students of the Salesian High School of Želimlje performed various songs and the students of the Rakovnik Music School performed a number of musical pieces. The new documentary of the Servant of God Fr Andrea Majcen, produced by IME Comunicazioni and ANS, was then presented. Subsequently the young people from the Fuskabo - social circus group, with the acrobats and the playful performances, performed.

Fr Artime concluded the meeting with a brief but significant speech in which he thanked everyone for their warm welcome and encouraged the young people and the Salesian Family to follow Don Bosco in his charismatic style. Children and young people from the Don Bosco Maribor Center prepared a thank you with the song "May cheerfulness be your way" and gave the Rector Major a shepherd's cane, a bouquet of lilies of the valley and a puppet of Don Bosco to all the Provincials.

For those present, the brief but intense meeting was truly an important confirmation of bringing forward the charism of Don Bosco in Slovenia in all its ways.