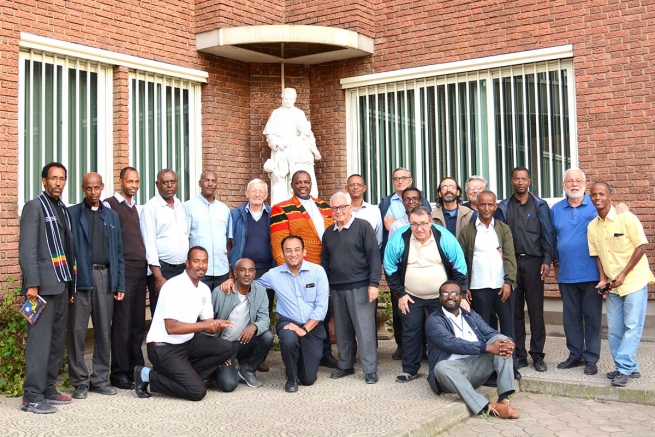 (ANS - Addis Ababa) – After a long stay of almost one and a half month in the Vice-province of “Mariam Kidane Meheret”, the Extraordinary Visitation of Fr Américo Chaquisse, on behalf of the Rector Major, ended in Addis Ababa, Ethiopia, on 7 May, 2019. The last day of the Extraordinary visitation was reserved for a meeting with all the rectors of the 14 presences in Ethiopia and an afternoon session for an encounter with the provincial council members.

In his final good night talk that was delivered in the presence of all the rectors and councilors, the regional appeared extremely happy and satisfied of the beautiful experience that he lived in Ethiopia, “the land of origins”. At the same time, he encouraged the Salesians to continue the great work they were doing in the country, especially in championing the cause of the young, work which began almost 44 years ago, in 1975.

In his final report regarding the state of the Province, the Regional Councilor presented all that he observed during his visitation, highlighting both the lights and shadows of the AET province, so that they can be given sufficient attention in regard to the improvement and progress of the province.  In the opinion of Fr Chaquisse, the Salesian province of AET presented a “beautiful reality” comprising of a diversity of culture, language, liturgical traditions, various ethnicities and, of course, a rich cultural heritage.

Even though the vice-province is rather young with a total number of less than 100 confreres, it is very active, having many educational institutions throughout the country, contributing greatly to the life of the Catholic Church in Ethiopia.

The Catholic Church is a minority in Ethiopia and makes up not even 1% of the total population of Ethiopia.  “As Ethiopia is characterized by a majority of youth population, there is a great lot that Salesians can do and is still doing in this growing country,” commented the regional in his final discourse.

The presence of Archbishop Silvano M. Tomasi, permanent observer of the Holy See to the United Nations in Geneva and currently active at the Dicastery for Promoting Integral Human Development, at the Thanksgiving Supper added a special flavor to the farewell gathering that was organized at the Salesianum in Addis Ababa.

The Ethiopian Province, canonically erected in 1998, currently has 94 Salesians, working in 14 Salesians presences throughout the country.