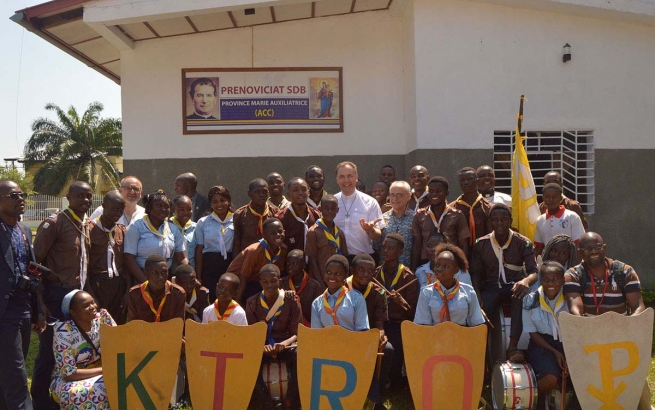 (ANS - Kinshasa) - After completing his Animation Visit in the Province of Central Africa (AFC), where he met with the Provincial Council and a paternal meeting with Chem-Chem novices, yesterday, May 15, the Rector Major began his tour in the Vice Province of Congo Congo (ACC).

Arriving in Kinshasa in the afternoon, site of the ACC Vice Province, Fr Ángel Fernández Artime immediately gathered with the Vice-Province Council, before spending the evening with the Daughters of Mary Help of Christians who animate the "Mozart Café" at the nearby Gombe municipality.

Today, Thursday 16 May, he meets with the Salesians of the Democratic Republic of the Congo, holds a press conference and a meeting with the young people of the Salesian Youth Movement in the Kinshasa area, who in his honor have planned an afternoon of celebration and artistic-cultural exhibitions.

Tomorrow, Fr Á.F. Artime shall preside over the Mass for young people and the local Salesian Family, before entering the Republic of the Congo (so-called Congo-Brazzaville) and meeting the novices.

On Saturday 18 May he will meet the Salesians of the Republic of the Congo, preside over the Eucharist for the local Salesian Family and hold a new press conference.

In the evening he flies to Pointe-Noire where, on Sunday 19 May, he will preside over the Eucharist with young people and the local Salesian Family, before leaving for Rome, with a stopover at Addis Ababa, Ethiopia.

The ACC Vice Province, guided by Fr Manuel Jiménez Castro, is the newest Salesian circumscription on the African continent, officially founded on 8 September 2017, starting with the “mother” Province of Central Africa (AFC). It was erected after a discernment that lasted about 6 years, which took into account both the growth and expansion of Salesian life in that area, and the difficulties for the animation and governance of the only AFC Province due to the great distances and the scarce connections - roads and such - present.

Dedicated to Mary Help of Christians, it has 105 religious and 10 houses, scattered between the Democratic Republic of the Congo and the Congo-Brazzaville.

Photos of the Rector Major's visit are available on ANSFlickr.