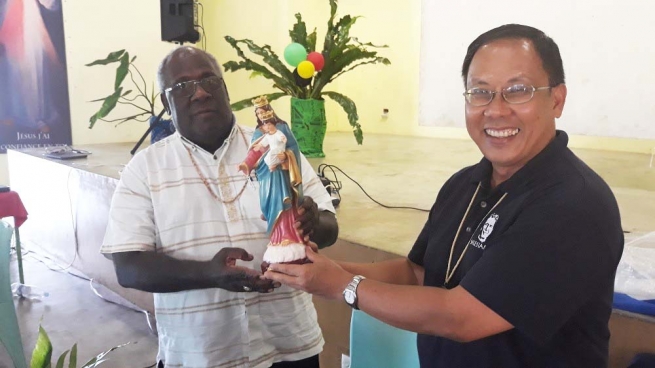 (ANS – Port Vila) – After the first exploratory visit of the PGS Vice-province Confreres (Provincial Fr Alfred Maravilla from PNG and Fr Srimal from Solomon Islands) last August 2018, this time the PGS Provincial superior with the EAO Regional Councillor made the visit to Port Villa (Vanuatu Republic capital) between 12-15 May 2019. The French/English-speaking country (lingua franca is Bislama, like the Pidgin English of Papua New Guinea) is very peaceful, with a Samoa-like population of 200,000 inhabitants spread over 6 provinces and 83 islands. The Catholic community is growing, with about 15% of the total population.

The warm welcoming care of Vanuatu Bishop Jean Bosco Baremes, SM (Marist), made the two visitors feel very much at home. Since the first Catholic evangelization of the Pacific, the Marist Congregation has been the main driving force and until now in many countries remains the only male religious congregation.

The three days were spent on the island of Efate, where Port Vila is also located, hosting its Catholic Cathedral of the Sacred Heart.

Thanks to the care of Bishop Jean Bosco, the visitors were able to visit a number of Catholic educational institutions, the Marist cultural and Catholic mission museum, a few sub-parishes and chapels and were also invited for the ongoing final assembly of the Vanuatu Diocesan Synod. This encounter offered a good opportunity for dialogue with almost all Catholic clergy, religious and lay leaders of the whole Vanuatu diocese. Variety of nationalities and points of view among the participants have been very helpful for discernment on this possible new mission frontier.

Following main point of the sharing: “Youth Ministry in Vanuatu needs new inspiration, since the younger generation are drifting away from parish life, some Catholic youth are even victims of marijuana. There is a need for another male religious Congregation beside the Marists; we would like to enjoy another Universal Church charism, especially that of St John Bosco. The drop outs and out-of-school youth need more care from our communities.”

The overall welcoming tone of the Synod assembly touched the heart of the two visitors and Fr Alfred shared the Salesian typical gift - a small statue of Mary Help of Christians as One who goes always ahead of Her sons in every mission land. The last three days of the Synod Assembly were celebrated with Her statue on the Presidents table.

The three-day interaction with the Vanuatu Catholic community is over and the two visitors entrust the future decision of the Rector Major to the motherly care of the Star of the Sea and Help of Christians, main Patroness of the whole Church in the Pacific.