Italy – Youth from CNOS-FAP of Valdocco start twinning with Aleppo 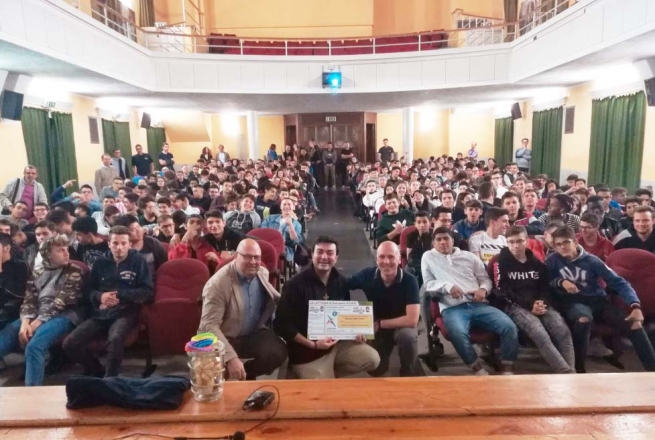 (ANS - Turin) - The youths of the Salesian Vocational Training Center of Turin-Valdocco have decided to take seriously the pastoral proposal for the year 2018-2019: "Io sono una missione #perlavitadeglialtri", that is: I'm a mission #forthelifeoftheothers. And for this reason, during a meeting with Fr Pier Jabloyan, Director of the Salesian Center in Aleppo, they signed a sister-city relationship of solidarity between the two Salesian realities.

"How many things do we take for granted, for the simple fact of always having them there, at our disposal? When we press a switch or open the tap, have we ever wondered if there is electricity or if water will come out?" These are just some of the reflections that Fr Jabloyan left in the hearts of young Valdocco students.

In a country that has been at war for eight years now, the Salesian oratory is a point of reference and hope: after-school activities, catechism, children's summer camp, sports teams, groups ... "normal things, in not normal times." Because during a conflict even the number of victims becomes almost "a habit". Victims like a boy, aged 12, killed by a mortar shell while waiting for the bus. Or like two brothers with their mother, at home, hit by a rocket in that place that, by definition, means safety.

In the words of Fr Jabloyan the youths could indeed feel the pain and suffering, but they also learned about the daily miracles and the hope of those who continue each day to do good and to witness that greater Love that drives them to give their lives for the others: in welcoming, in playing, in helping, in finding the strength to still celebrate every little joy when everything around them speaks of death. And it is precisely here that the twinning that unites Valdocco with Aleppo resides.

At the end of a year of reflection, spent through moments of play and celebration, animation and retreat, the youths of the CNOS-FAP of Valdocco decided to put themselves on the front line "for the lives of others", aware that only in this way can one's life be wholly fulfilled. Why they have launched a subscription with prizes, whose proceeds will go entirely to the Salesian house in Aleppo.

A small gesture, certainly, but one that can really make a difference. Because, as Fr Jabloyan said: "at the end of the war, those who have hurt will be forgotten. But all those who have done good to the young of Aleppo will always be remembered."