Italy – Feast of Mary Help of Christians in Turin 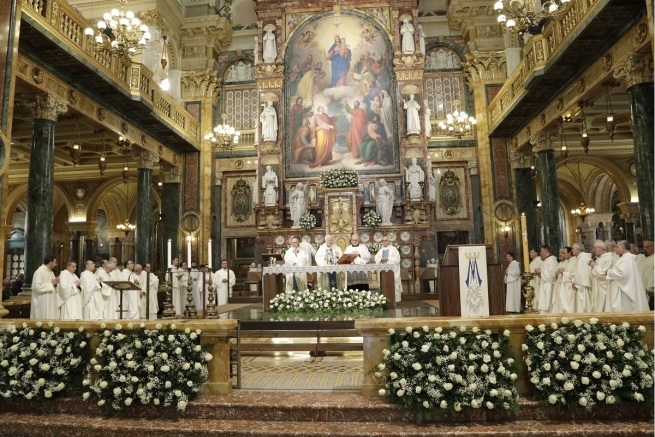 (ANS - Turin) - The Feast of Mary Help of Christians isn't just one, but thousands: as many as the pilgrims who come to the Basilica of Turin, as many as the churches and chapels dedicated to her in the 134 countries where the Salesians have extended their works.

It is not simply a numerical matter: it is the variety of ways of approaching the sacred place, of expressions of faith, of life stories that occur at the feet of Mary. For those who had the privilege of experiencing May 24 amidst the temple and the courtyards, in the streets and in the rooms of Valdocco, it was a unique experience.

There is the feast punctuated by the Eucharistic celebrations, Mary's maximum desire to see the believers gathered around the Word and the Bread of the Son. The Gospel passages that actively see her alongside Jesus to also give Him the human courage to face His mandate, as well as together with the Apostles to overcome fear and make the Resurrection manifest, are readings that are repeated to entrust to the Mother every existential and spiritual uncertainty.

From here the meeting with the students and the teachers unfolds, an educational community that intercepts the different ages and the expectation of the future; then the meeting with the diocese, which nourished the Salesian experience, and which becomes an occasion for the archbishop of Turin, Msgr. Cesare Nosiglia, to underline the "missionary anxiety of giving Christ" that we collect from Mary and translates into "courage to dare" even in this time of "crisis of hope".

In the late afternoon the celebration with the young people presided over by Rector Major Fr. Ángel Fernández Artime, who also crowned the meeting of the previous days with the representatives of the entire Salesian Family. It was a meeting - together - in the "home" which, as the Successor of Don Bosco specified, is made "for holiness, for devotion, for the mission". A time and place to strengthen oneself in the charism to fulfill a great welcome project "without borders".

The evening procession was canceled due to bad weather: the wooden statue, already subjected to restoration, would have risked being damaned. But this did not exclude the solemn recitation of the rosary with the basilica crowded and thousands of people in the square and in the courtyards, fortunately then not bathed by rain.

Among them, the many missionaries, male and female, who came - some for the first time on the Feast day - to Mary Help of Christians to share their experience (Don Bosco Missions had them meet in their offices in the afternoon) and to give pure energy to their service.