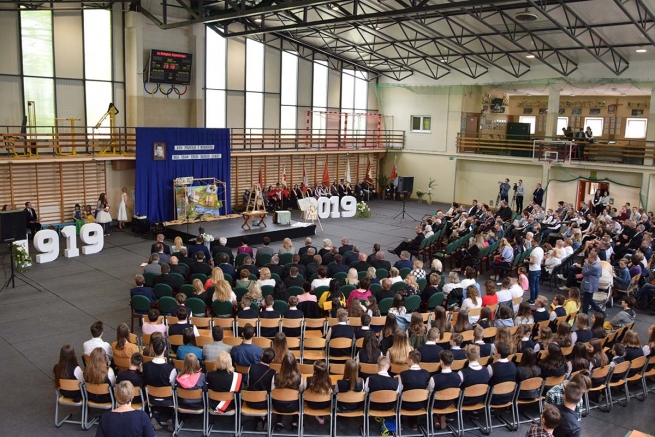 (ANS - Aleksandrów Kujawski) - Many "miracles", large and small, have occurred to Aleksandrów Kujawski in recent decades. Above all, "miracles" of Salesian education, which have generated so many fruits in the lives of the many young people who have grown up in the classrooms of the "Kujawskie" Salesian Institute during its 100 years of existence. For this reason, on Saturday 18 May, the entire educational community and the school family celebrated the important anniversary.

Preparations for this great celebration lasted for several months and involved many people who are very concerned about the idea of ​​education in the spirit of Don Bosco.

The celebrations of the centenary of the Kujawskie Institute, which this year coincide with the Feast of the Province of North Poland (PLN), based in Piła, began with a solemn Eucharist in the parish church of Mary Help of Christians, presided over by the Provincial, Fr Roman Jachimowicz, SDB.

After the greetings of the Director of the Institute, Fr Grzegorz Gruba, all those present - past pupils, students, parents, employees, benefactors, representatives of local and Salesian authorities - were able to hear the homily of the Provincial, who drew a brief outline history of the institute and encouraged everyone to continue to take care of its good development and to involve future generations of citizens and the inhabitants of the surrounding areas. Then, at the end of the Eucharist, Fr Jachimowicz gave souvenirs to the Salesians who this year celebrate their anniversaries of religious profession and priestly ordination.

Then the celebration's participants, accompanied by a musical band and songs about Don Bosco, crossed the streets of the city to the Institute, where the artistic part of the day awaited them, work in which the history of the Turin saint was remembered, as well as referring to the centennial tradition of the school. Finally, after reading the commemorative letter from the President of the Republic of Poland, Andrzej Duda, and the wishes of the Minister for National Education, Ms. Anna Zalewska, several guests spoke.

Further celebrations took place in the school's sports field: it was a moment of meetings between teachers and graduates, shared photos, dances and visits within the Institute.

Noteworthy was the presence of many past pupils, in particular of the 1940s and 50s, as well as the high school graduates.

On the occasion of the centenary of the Institute, a special publication was also published, entitled Kolegium Kujawskie 1919-2019. Zatrzymane chwile.