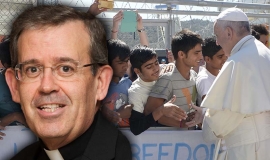 (ANS - Rome) - Observing the gestures and words of the Pope in Lesvos, and before that in Lampedusa and on many other occasions, Fr Fabio Attard, Councillor for Salesian Youth Ministry, invites us to approach the phenomenon of migration today not from the point of view of "a threat on the part of those called to share with those who have nothing," but with the understanding of the situation of despair of those who leave "a land that is home to go to a strange land."

Those who abandon their land, and travel often in the face of extreme danger, do so "because the alternative is worse than the risk they are taking. We need to realize that these movements of people are never a luxury," adds Fr Attard.

Moreover, despite a Eurocentric attitude that thinks only of migration from South of the Mediterranean to Europe, the phenomenon is global, with massive migration involving Sub-Saharan Africa and East Asia. Given that we are dealing with a global phenomenon, according to Fr Attard the Pope's trip offers three main lessons.

First, Evangelization: "The Pope's gesture is worth a thousand sermons, he was able to create synergies in the faith community and an empathy with the public. (...) It also confirmed the validity of reading the story through the eyes of the teaching of Jesus and reminds us of Matthew 25:35: 'I was a stranger and you welcomed me' ".

Then, strictly human: "Fortunately, throughout the European Union there are people of good will, Christians and others, acting with sentiments of human nobility" says Fr Attard. He refers to the great commitment of the Salesian Family in welcoming, offering accommodation and education, human development and socialization, job prospects, all to a standard of excellence, as, for example, in the School in Brussels which is open to young people of 35 different nationalities or the very many communities in Spain that welcome thousands of migrants.

Finally, from a political point of view: the Pope's visit recalled a vision of Europe that is not afraid to welcome migrants, and instead of reacting with the "logic of exclusion and walls" is capable of starting from the "great values ​​that have made European civilization."

In conclusion Fr Attard recalled the statement recently issued by Don Bosco International (DBI) on this issue, which "expresses what we Salesians believe and we share based on our experience of the challenges, not the problem, of migration."