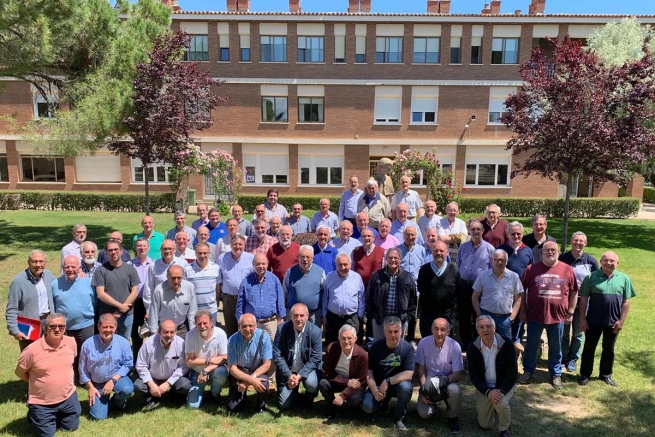 (ANS - Madrid) - The Extraordinary Visit of Fr Stefano Martoglio to the “St James Major” Province (SSM) has ended. The Councilor for the Mediterranean Region began his visit last September and it ended with the meeting of the Directors on 27-28 May at the Salesian house in Mohernando, Guadalajara.

In the final meeting, Fr Martoglio thanked everyone for the welcome given him in all the houses, and he positively assessed "the great Salesian vitality that I found in your land." The Extraordinary Visitation, carried out in the name of the Rector Major, helped him to see "a very great sense of belonging to the Congregation" and to evaluate the paths taken in the Province.

"I finished all the visits to the houses with the same sentence as Don Bosco. And not because it has no other expressions available, but because I believe that this is the vocational blessing: 'Take care of the poor and God will take care of you.' It is a simple expression, which has an impressive force."

For his part, the Provincial, Fr Juan Carlos Pérez Godoy, thanked the Regional Councilor for these months in which he had the opportunity to learn about and encourage work in the Salesian houses and all the people involved.

From September 2018 to May 2019, Fr Martoglio in fact visited the 54 houses that are part of the SSM Province, located between the center and north-west of Spain, meeting not only Salesians, but also many teachers, educators, pupils, catechists and collaborators in the mission in general.

The Councilor also took part in various Provincial meetings, such as the two sessions of the Provincial Chapter in preparation for the General Chapter of the Congregation to take place in Turin in 2020; he was also able to share the festive atmosphere in the solemn celebrations for Easter, the Feast of Don Bosco or of Mary Help of Christians, and be close to the Salesian Family and to the local Church, meeting with several bishops.

In his messages he insisted on the importance of being a "home for all", and above all for the young people who attend Salesian houses, and recalled that the response to the needs of children is not something circumstantial, but constitutional in the Salesian charism. This is why he invited to be other Don Boscos today, trusting in Mary Help of Christians, and underlined the importance of the shared mission between Salesians and lay people. Finally, he asked not to forget the most difficult realities, such as that of Syria, a country belonging to the same Mediterranean region.