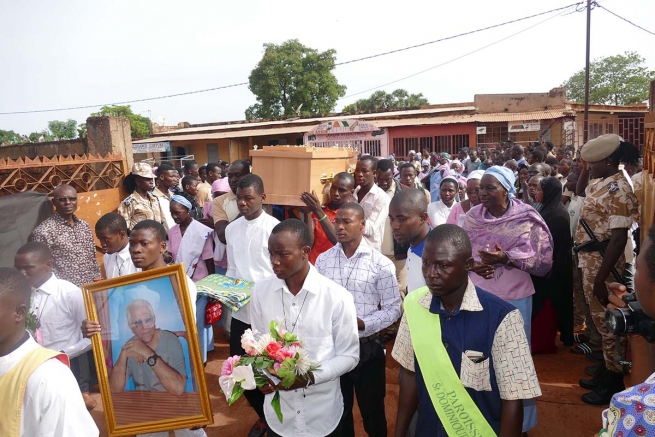 (ANS - Bobo Dioulasso) – Taking place on May 23 was the funeral of Fr Fernando Hernández, SDB, who died in Bobo Dioulasso, Burkina Faso, on Friday 17 May, due to a crime the authorities are still investigating. From 7:30 am local time, to the opening of the funeral home, there was an uninterrupted flow of people who came to bear witness of their affection for the deceased missionary and their closeness to the whole community. Then, at 8:30 am, the prayer for the dead began, which started the celebration in suffrage of Fr Hernández.

The religious ceremony, as often happens in Christian communities in Africa, lasted over three hours in all and saw the participation of thousands of people who occupied the entire pavilion specially set up in the Salesian school by soldiers and Salesian prenovices.

On the central wall was a photograph of Fr Hernández, surrounded by Don Bosco's phrase: "I promised God that until my last breath it will be for my dear young people!"

After the prayer for the dead, presided by Fr Américo Chaquisse, Regional Councilor for Africa-Madagascar, the Eucharist began, concelebrated by 60 priests, an impressive testimony of a local Church committed to its own people.

The presence of the bishop emeritus of the diocese, the Secretary of the Apostolic Nunciature in the country, religious communities, diocesan organizations, Salesians and lay collaborators of other Salesian centers in various countries, groups and associations of the Salesian Family and other religious entities, together with representatives of the Spanish diplomatic corps, the government and the city's civil authorities supported and accompanied the Salesian community, much tried by the sudden mourning, and Marcelino Hernández, brother of Fr Fernando, who came from Spain to represent the family.

Within the assembly a large group was made up of children from the vocational school and other young members of the Christian communities, who from their behaviour showed that they had interpreted the teachings and life lived alongside Fr Hernández as gifts that the missionary had given to them.

The concluding words pronounced by Fr Juan Carlos Ingunza, former director of the Don Bosco Center of Bobo Dioulasso, by the Vicar General of the diocese, of the President of the religious of Burkina Faso, of the Secretary of the Apostolic Nunciature in Mali and Burkina Faso and of the Salesian Provincial, had the figure of Fr Hernández emerge in all his brilliance.

The recognition and appreciation of his total surrender to the mission, to the gift of life and the gratitude for Fr Hernández' wanting to be buried on African soil were the central elements of the farewell ceremony.

Finally, the remains of Fr Hernández were accompanied in procession up to the tomb dug in the garden of the Salesian house where, with ritual prayers and a final applause, a day full of meaning and shared hope concluded.