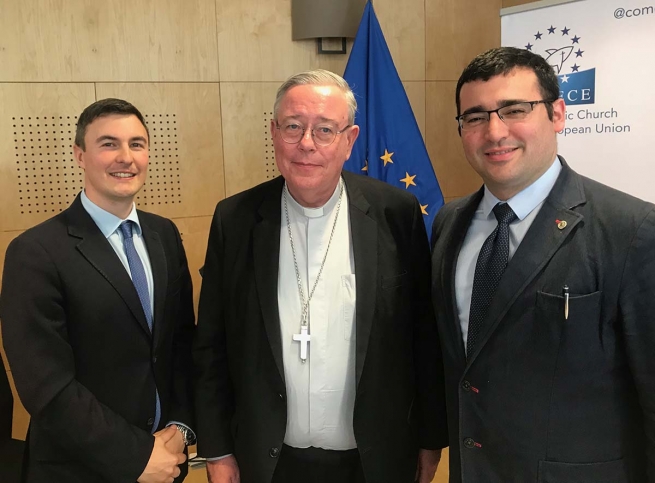 (ANS – Brussels) – Don Bosco International (DBI) is the office of the Salesian Congregation advocating for youth rights before the European Institutions. After serving four years in Brussels as Executive Secretary of DBI, Mr Angel Gudiña is concluding his mandate, being replaced in this function by Mr Renato Cursi, former Secretary of the Youth Ministry Department of the Salesians of Don Bosco in Rome.

On the occasion of DBI General Assembly in 2015, the organisation’s Council of Administration was renewed, with Fr. Fabio Attard sdb, General Councillor for Salesian Youth Ministry, being elected as President of DBI and Mr Angel Gudiña being appointed as Executive Secretary. As well, the whole structure and working methodology of DBI were strengthened and reformed. A strategic plan for three years was adopted, monitored, evaluated and then renewed in 2018. The following three priorities for the advocacy work of DBI were set: poverty and social inclusion, migration and transition from education to employment. Not only did these choices allow the Salesian Congregation to better focus its advocacy work before the European Institusions, but they also contributed to raise awareness about European Union among the Salesian Provinces of the Salesian Centre-North Europe and Mediterranean regions; leading them to be actively involved in this field.

The positive outcomes of DBI over the last four years were the result of a collective effort: the active involvement of the General Council of the Salesians of Don Bosco, the participation of the Salesian Regions and Provinces, the expertise provided by many Salesian and lay experts from different Provinces, the warm welcome service offered by the Salesian community in Brussels (Woluwé Saint Lambert), together with the ongoing contribution of the Executive Secretary, the Council of Administration and the annual General Assemblies of DBI.

Between 2015 and 2019, DBI was able to achieve many different results: from high-level meetings and interactions (e.g. with the High Representative for Foreign Affairs and Security Policy, the President of the European Parliament and the European Commissioner for Employment of Social Affairs), to the integration of DBI in both civil and ecclesial European networks and platforms, the publication of policy papers by DBI (based on the reflection of experts from different Salesian Provinces on topics of interest, such as youth poverty, inclusion and participation), the institutionalization of the celebration of the Feast of Saint John Bosco in Brussels with relevant partners, a stronger and more intense interaction within the international Salesian networks and platforms, such as Don Bosco Youth Net and Don Bosco Network.

Before joining DBI, Mr Angel Gudiña, Past Pupil of the Salesian house of Coruña (Spain) and current Secretary General of the World Confederation of Past Pupils of Don Bosco, worked in the Spanish National Center of Salesian Youth Ministry in Madrid, in Confederación Don Bosco (Salesian youth centers), and he was also actively involved in civil platforms such as the National Youth Council of Spain. His future destination will be the Salesian Missionary Procure of Madrid, Spain, where he will be in charge of institutional and corporate relations, starting his new mandate on 1st June 2019.

The hand-over process, which took place in the first months of 2019 between Rome and Brussels, was reported to the annual General Assembly of DBI in January 2019 and coordinated by the President of DBI, in order to guarantee the continuity of the activities and processes agreed in the 2018-2021 Strategic Plan.