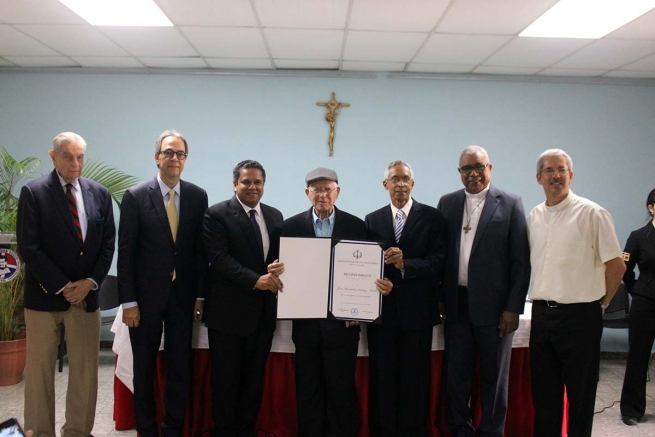 (ANS - Santo Domingo) - For many people philosophy is a de-classed discipline. Suffice it to say that in many countries it is a forgotten science, excluded from the study centers. What is philosophy today or why is it important? In general, there is much ignorance in this regard. The reasons why this happens are many, including the decline of curiosity or the omnipresence of the blind idea that the past does not bring anything of value to the present. After all, there is no deep reflection on the part of a "light" culture, an "efficient" culture. Against this backdrop, Fr Jesus Hernández was awarded.

The Dominican Association of Philosophy (ADOFIL) and the Salesian Province of the Antilles gave recognition to Fr Jesús Hernández Martínez, SDB, for his contribution to Dominican philosophy and Salesian formation for over 60 years.

The philosophers who participated in the event highlighted the bibliographical, philosophical and pastoral contributions of Fr Hernández Martínez in favor of Dominican education, culture and society.

For their part, the Salesians praised their confrere for his commitment to the Salesian mission through the creation, development and promotion of the Salesian Antillean Library (BAS), and his support for the intellectual formation of generations of religious, priests and lay people, devoting themselves to the education and evangelization of the poorest young people.

An excursus on the life and work of the awarded Salesian was carried out by José Mármol, Executive Vice President for Public Relations and Communication of the “Banco Popular Dominicano”, who announced how all BAS books will be digitized to safeguard their cultural and philosophical heritage and assets.

"The Salesian Antillana Library has already celebrated 60 years of institutional life in the Spanish-speaking Antilles, and Fr Hernández Martinez has completed six decades of priestly life. His two immense vocations, as religious and bibliophile, are born and grow together," he added.

Dr Edickson Minaya, Director of the Philosophy School of the Autonomous University of Santo Domingo (UASD) and President ADOFIL, offered a profile of the work of Fr Hernández Martínez in the 60 years of service, and publicly acknowleged the worth of his work and thanked him for his philosophical contributions.

Lastly, Fr Francisco Batista, SDB, Salesian Provincial of the Antilles, spoke of the over 60 years of Fr Hernández Martínez's dedication to the BAS and to work in favor of philosophy students.