South Korea – The most senior member of the Korea Salesian province 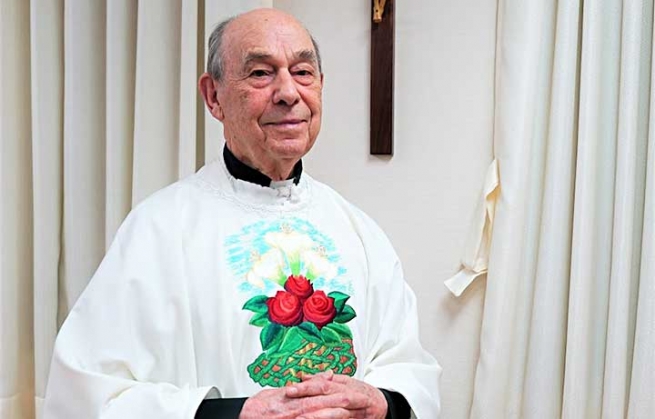 Fr. Blanco was born on 18 August 1930 in Madrid, Spain as the second of five siblings (three brothers and two sisters). During the Salesian retreat in September 1945, teenager Jose Maria decides for religious vocation after reading the biography of St Francis Xavier. He shared his dream with his Salesian confessor of living for God and gave his best effort in prayer and studies, scrapping his dream of becoming a pilot, and entering the Salesian formation house.

After the novitiate he made his first profession in 1949 (70th anniversary in 2019) and was sent as a missionary to Japan, first serving in the orphanage – Boys Town: “Among our batch of 63 Salesians who made the first profession, no fewer than 30 of us submited their application for the missions. Unlike many of my friends I was not sent to Latin America, but to Japan. Since I needed the permission of my parents, my father agreed” he said.

After his studies and apostolic work in Tokyo, Fr Jose Maria was ordained to the priesthood in Tokyo on March 8, 1959.

As a busy working young missionary priest in Japan, after his first home visit, Fr. Blanco suddenly received a new obedience: “I still remember 13 March 1962. Just after returning from Spain, I was called by Father Provincial: ‘Without opening your luggage, make preparations for your travel to Korea.’ Honestly, I didn’t want to go to Korea, since I was already accustomed to life in Japan and I was afraid to learn another new language and adjust to another new culture and environment. However, I thought that this is the will of God and gladly accepted this obedience.”

“On 30 March 1962 at 3 p.m. I arrived at Gimpo airport in Seoul and my first obedience was the Salesian parish in Dorim Dong, Seoul. Living in the Dorim Dong parish, it was beautiful to listen every morning to the fervent prayer of the faithful. It was also my great joy to play with the children coming to the parish. After my arrival, I received my new Korean name ‘Father Wang Joseph’”.

Then Fr Joseph experienced the apostolate in Gwangju and in Seoul as an evangelizer among the poor and marginalized people. And with this heart he has already spent 57 years in Korea.

Currently, Fr Jose Maria is living in the provincial house community (Seoul) as provincial archivist, and translator of official correspondence between the KOR province and the General House in Rome. According to his Korean age, Fr Blanco in 2019 would already be 90 years old, however he has better health than many younger confreres, his diligent and healthy life style becomes a good model for the younger Salesian generations.

“Our vocation is a great grace from God. We need to humbly give thanks to the Lord who calls us to this life. Even in the busy daily life we should not miss Eucharistic adoration, because God is the centre of our life! And we should also entrust all to our Mother Mary. She is the mother of us all and intercedes for us!” he concludes