RMG – Baptized and sent. Church of Christ on mission in the world 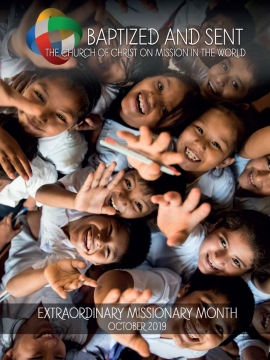 (ANS - Rome) - In view of the Extraordinary Missionary Month (MMS) announced by Pope Francis for next October - due to the centenary of the Apostolic Letter of Pope Benedict XV, namely Maximum Illud – the Dicastery for Salesian Missions has elaborated support for all the Salesians and pastoral workers who intend to relaunch the Church's evangelizing action in their field of activity. The subsidy, which has as its title the same MMS theme, “Baptized and sent. The Church of Christ on its mission in the world”, will be officially launched next Sunday, June 9th, Solemnity of Pentecost.

The booklet edited by the Dicastery for Salesian Missions was elaborated in the form of a diary that accompanies the reader / missionary throughout the month of October 2019, offering different elements for reflection each day. It features:

- A quote from the Maximum Illud;
- Biblical references related to the same subject;
- A reflection of the magisterium of the pontiffs following Benedict XV;
- A thought of Pope Francis;
- A starting point derived from the documents of the Congregation.

This wide range of elements offered to the readers' reflection is completed each day with two other segments: a section containing suggestions for sharing and proposals for practical activities; and a prayer to God asking for the intercession of a particular saint for the needs of the Church in the various territories of the world.

The aid, which in Salesian communities can be used in morning meditation or in the vespertina community prayer, has already been printed in 700 copies in the English version, and is currently being printed in the Italian and Spanish editions.

Moreover, to distribute it in a capillary way, the digital version of the text has already been sent in recent weeks to various Provinces, which have taken care of the translation into local languages and will independently provide for its printing as needed.

But there is more: since the value of this initiative is to give support to global ecclesial missionary action, the Dicastery for Salesian Missions offers the aid in digital form and can also be modified to other groups, religious families and local Churches, which can further customize it according to their needs.

“Ours wants to be simply a service for the Church,” explained the editor of this product, Fr George Menamparampil, SDB.

For anyone interested in receiving information or materials from the grant, please write to: This email address is being protected from spambots. You need JavaScript enabled to view it.