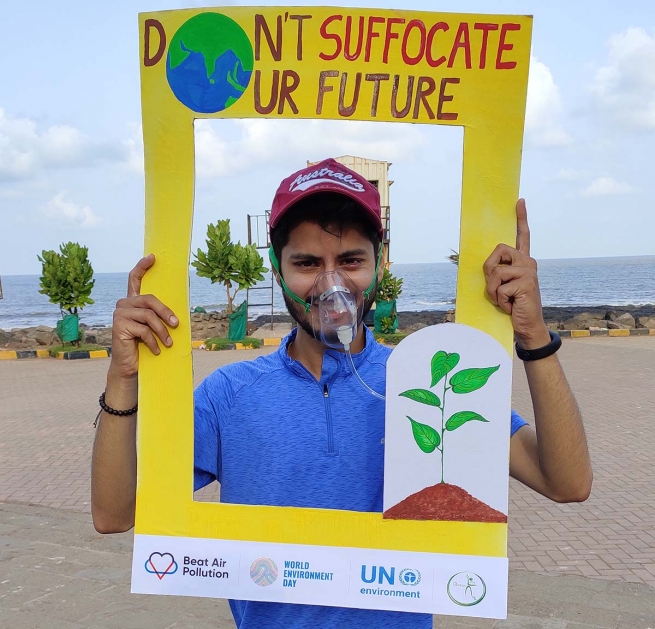 (ANS – Rome) – ‘Beat Air Pollution’ was the theme for World Environment Day 2019, a global event celebrated annually on 5 June.  In the context of this theme on air pollution, Don Bosco Green Alliance (DBGA), together with the Don Bosco Network (DBN), held a month-long campaign entitled “Don’t Suffocate Our Future!”.

According to research studies, effects of air pollution are more serious in children than in adults. Since children are still growing, air pollution harms them during the developmental stage of their life, causing lifelong health problems. Interestingly, research also indicates that children exposed to polluted air at a young age are in danger of developing clinical depression as they grow older.  Negative mental health can have adverse influence on many aspects of life, including daily activities, social interactions and educational achievements.

In the face of these serious threats caused by air pollution, young people from across the Salesian world raised their voices to demand: “Don’t Suffocate Our Future!” The month-long campaign from 1 May to 5 June used various social media platforms to make this demand of young people heard, both by civil society and especially by decision-makers.

World Environment Day itself was marked by several events organized by various Salesian institutions in different parts of the world.  In Spain, Plataformas Sociales Salesianas, together other Salesian associations such as the Confederation of Don Bosco Youth Centres and the National Salesian Youth Pastoral Centre, launched the challenge #PonteEnVerde (#GoGreen).

In Panama, the Eco Club of Instituto Tecnico Don Bosco, Panama City, celebrated the day by conducting a cleanliness drive in four different areas of the city. In the Dominican Republic, ‘Green minds PEDB’, the Ecological Group of the Don Bosco Educational Plaza participated in the programme "Youth that advances and changes, a country that progresses". They generated awareness on the necessity of protecting the environment with the help of banners, singing and dancing at different strategic locations in the city.

The Don Bosco Oratory at Santiago del Estero, Argentina, visited the Maco forest and planned for the replanting of the different species that inhabit the native forests. They also identified the various flora and fauna that help measure the health and vitality of the forest. The students of the Salesian School Don Bosco, at Villarrica, Paraguay, created various videos highlighting the ills of air pollution, and posted them across various social media platforms. Also, in Paraguay, the Salesian Agricultural Institute at Caaguazu has planned the ‘Youth march for Clean Air” on 8 June.

In India, youth volunteers from the Salesian environmental organization GreenLine, Mumbai, visited different important parts of the city, creating awareness on air pollution and encouraging citizens to make a pledge to combat this problem. The youth group from Don Bosco Parish, Baroda, planted saplings in the parish compound to celebrate World Environment Day. Similarly, the boys from Snehalaya, a home for street boys in Baroda, planted saplings in their compound.  Over 150 children from Chithra Don Bosco in Bangalore were given saplings to be planted in their own homes. These children also took a pledge to nurture these plants.

“There has been active participation by Salesian institutions in several countries in this year’s World Environment Day celebrations,” said Fr. Savio Silveira, the Convener of DBGA.  “It is very encouraging to see the strong support Salesians are giving young people in responding to environmental challenges,” he added.