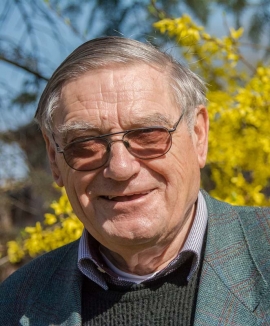 (ANS - Budapest) - The Hungarian Salesian Province announces with profound emotion that Fr József Havasi, former Provincial, passed away on the afternoon of 5 June 2019, at 90 years of age, 72 as a Salesian, 59 as a priest. "We give thanks to God for having known him," his confreres from Budapest communicate.

Fr Havasi was born on 14 March 1929 on the outskirts of Budapest in a family with 6 children. From an early age he wanted to become a priest and sought his vocation among religious orders. As a Scout he was able to meet the Salesians and was admitted to the Salesian Institute of the Clarisseum, where the future blessed Stephen Sandor also lived.

Here he attended the aspirantate in 1943 and then was sent to Nyergesújfalu to finish the Salesian Lyceum. In 1946 he began his novitiate in Mezőnyárád, and made his first vows on August 16, 1947. Those perpetual he pronounced on December 8, 1951 in the Clarisseum - clandestinely, because of the communist dictatorship, in front of 4 people, including Stephen Sandor.

After the suppression of the religious orders by the regime, in 1950 he was received at the diocesan seminary of Vac - hidden in the bishop's palace; but in 1952 he had to leave the city and go to work. At this time, however, he attended the State University, earning a degree in Literature. During the 1956 Revolution he managed to escape to Italy, completed his theological studies and was ordained a priest on 11 February 1960 in Turin.

Having no hope of returning to Hungary, he wanted to go to the Philippines as a missionary. But the Provincials sent him as close as possible to his homeland: in Vienna, Austria, where he worked for 30 years in an institute and home for young people.

In the Seventies he managed to get in touch with the Hungarian Salesians, who later managed to visit him in Vienna; later, having become an Austrian citizen, he was also able to return visits to Hungary, and he helped them by bringing religious books, Salesian materials, magazines, and related material.

In 1990, after the fall of the regime, Rector Major Fr Egidio Viganò appointed him Hungarian Provincial. He took the leadership of the Province on 31 January 1991 and – a rarity - was renewed for two terms: thus, he was the Provincial for 18 consecutive years, until 8 November 2008. He succeeded in reconnecting his confreres, rebuilding the buildings and reorganizing everything, ensuring prosperity for the Hungarian Province once again.

In 2013 he received the Knightly Cross of the Order of Merit for having been able to rebuild the Hungarian Province.

"He always said he was happy and was an active member of the Budapest-Újpest community to the end," his confreres say of him.