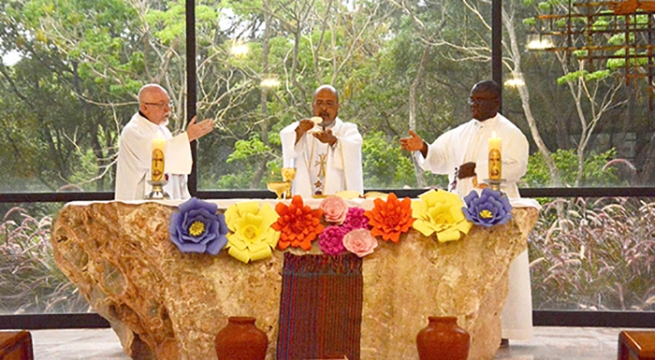 (ANS - Amatitán) - From Monday 3 to Friday 7 June there was the Third Formation Workshop for Planning and Development Offices and Salesian Vocational Training Centers (CFP), a continental event that aims to guide the strengthening of the capacities of these bodies in the service of the Salesian mission.

The meeting was promoted with the objective of sharing experiences, understanding common challenges and fostering networking. The previous workshops took place in September 2018 in Cochabamba, Bolivia, and in February 2019 in Sao Paulo, Brazil.

The meeting was attended by the leaders of various PDOs and CFPs from various countries of the Salesian regions of Interamerica and America South Cone. Specifically, this workshop focused on the "Logical Framework" for international call for tenders, and on chain of impacts within the formation project. PDO representatives directed their efforts to learn how to develop, monitor and evaluate projects; while the people in charge of the Centers (PCP) were engaged in learning skills training via understanding the Salesian ecosystem, the different models of accompaniment and their practical application.

The first day of work began with the Eucharist presided by the Superior of the Province of Mexico, Guadalajara (MEG), Fr Hugo Orozco Sánchez, who in his homily stressed the importance of “working as a network to better serve the recipients of the Salesian mission."

Later the engineer Humberto Camacho, Coordinator of OFPROBOL, the PDO of Salesian Bolivia, said, "We are building together a path", referring to the work that has already been developed, gradually and in a projectual way, and they want continued.

The Design and Development Offices are research, analysis and planning centers at the service of Salesian works and, more specifically, for poor and needy young people. The Vocational Training Centers are institutions in which formal technical qualification studies and work qualification programs are promoted mainly aimed at young people.

The event brought together 80 people from 17 Latin American countries and 23 Provinces (18 of the Salesians and 5 of the Daughters of Mary Help of Christians). In addition, five Salesian NGOs participated in various projects in Latin America: "Don Bosco Mondo" from Germany, "Jóvenes y Desarrollo" from Spain, "Salesian Missions" from the United States, "Jugend Ein Welt" from Austria and "VIS - International Voluntary Service for Development" from Italy.

The workshop has fundamentally served to deepen the "Logical Framework" as a fundamental tool for participating in major international projects, as well as the chain of impacts and the monitoring and evaluation procedures.