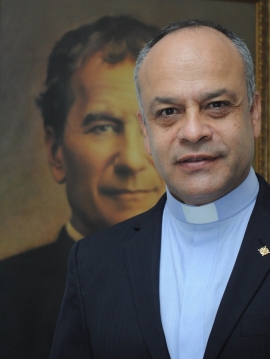 (ANS - Rome) - During the summer plenary session of the General Council, with the consensus of the other Council members, Rector Major Fr Ángel Fernández Artime appointed as new Superior of the "St Peter Claver" Province of Colombia-Bogotà (COB) Father John Jairo Gómez Rúa, former Provincial of the "St Luigi Bertrando" Province of Colombia-Medellín (COM) between 2012 and 2018.

He is currently Director of the interprovincial Post-novitiate "Filippo Rinaldi" of Copacabana.

Fr Gómez Rúa takes on the role as COB Provincial for the six-year period of 2019-2025 this next July 28 during the Eucharist which will be chaired by the Regional Councilor for Inter-America, Fr Timothy Ploch, at the National Shrine of Our Lady del Monte Carmelo - Leone XIII Institute in Bogotà.