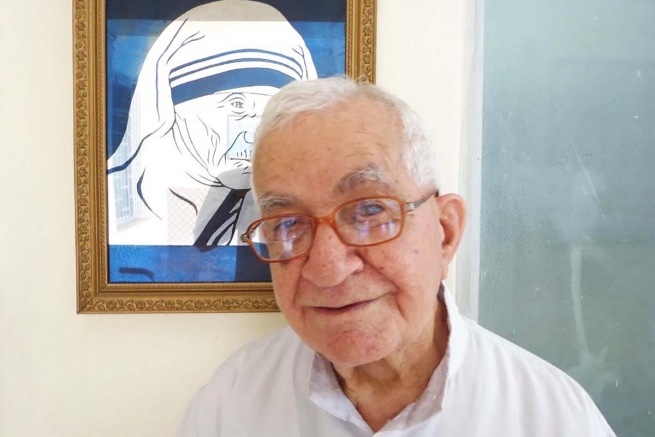 (ANS - Calcutta) - Salesian Fr Rosario Stroscio, for 40 years chaplain of the Missionaries of Charity of Mother Teresa, as well as, at 97 years of age, the oldest Salesian of the India-Calcutta Province, passed away last 9 June. The funeral is scheduled for Friday, June 14, at 14:30 local time, at the Marian shrine of Bandel.

According to what Fr Mathew George, INC Provincial Secretary, has reported, Fr Stroscio started having a high fever from the previous evening, immediately after participating in the Mass. Visited by a doctor and after taking some medicine, he seemed to have recovered, but was in any case given the anointing of the sick. As he had difficulty breathing during the night, he was taken to the Ruby hospital where he died on Sunday morning 9.

Fr Stroscio, one of the 460 Salesian missionaries to travel to India from 1906 to today, was born in Furnari, Sicily, in 1922. He reached India as a teenager in 1939, after leaving Sicily in the footsteps of the missionaries who had so impressed him in his youth. A life of commitment and poverty began. "We were very poor, but cheerful," he told the Corriere della Sera newspaper a few years ago.

He nevertheless endured his cross and explained Christianity to the Indians with simplicity. Because "it is a difficult religion only for those who have studied too much," he explained. "They immediately understood concepts like the resurrection and immortality of the soul. It was a kind of obviousness." In the first month already 20 had asked to be baptized. And it was only the beginning.

In his long life he had to overcome many difficulties: like when in 1940 Mussolini declared war on the United Kingdom - of which India was still a colony - and he was interned in a camp. They treated him well, but in the Rajastan desert there were almost 50° C and the prisoners were beginning to die. Thus the missionary and his other companions in misfortune were moved to a place at the foot of the Himalayas. They were released only in 1944 and Fr Stroscio resumed his mission.

Many were the events of historical importance he was witness to, but in the mind of the missionary above all there was the moment of the first meeting with Mother Teresa. "I saw her for the first time in the Cathedral of Calcutta in 1948," he recalled. "She was very intelligent. She had a gift for languages and a great big smile. She understood that I had understood her, and I understood that she understood me. She looked for the face of Jesus in others, and found Him in the dying, the disinherited, the disabled, the orphans and women rendered mad by violence."

In addition to building the church dedicated to Mary Help of Christians in Gobra, Calcutta, Fr Stroscio was the first National President of the Indian chapter of the Marian Movement for Priests, which he served for various mandates starting in the 1970s.

A former History Professor at the Salesian Institute of Sonada and then INC Provincial (1967-1973), he was accused of the trumped-up crime of "conversion" during his missionary service in Maliapota, in the diocese of Krishnagar, and risked being deported. It was then that Mother Teresa intervened in his favor. She asked the Marxist government to have him as chaplain of the Missionaries of Charity at the large rehabilitation center of "Prem Dan", also in Calcutta. The authorities withdrew the expulsion order and from 1979 Fr Stroscio continued to reside in Calcutta.

The Salesian was able to "repay his debt" with the future saint some years later when, in 1997, Mother Teresa was hospitalized for heart problems. The then Archbishop of Calcutta, Msgr. Henry Sebastian D’Souza, asked Fr Stroscio to pray for her and to give her the anointing of the sick. The two prayed together and on that occasion the religious woman recovered.

Fr Stroscio got to know the Venerable Francesco Convertini (1898-1976) especially during the last years in which they lived in the same religious community. He was his provincial superior and director of the community in which Father Convertini died on 11 February 1976.

The words with which Fr Stroscio concluded the announcement of the death of Fr Convertini: "All his life was a magnificent testimony of the most fruitful technique of priestly ministry and missionary work. We can summarize it in the simple expression: 'To win souls for Christ there is no medium more powerful than goodness and love!' " Words that are also confirmed by the long and laborious missionary life of Fr Stroscio.