RMG – Cause of Beatification and Canonization of Fr Silvio Galli, SDB, begun 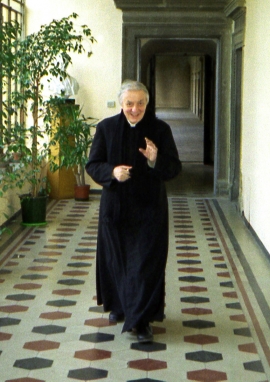 (ANS - Rome) - On 12 June 2019, the 7th anniversary of the ascent to heaven of Fr Silvio Galli, the bishop of Brescia, Msgr. Pierantonio Tremolada, was presented with the Supplex libellus, that is the official instance with which the Salesian Congregation asks for the opening of the diocesan Inquiry into the virtues, the fame of holiness and signs of Fr Silvio Galli, Professed Priest of the Society of Saint Francis of Sales.

Fr Silvio Galli was born on 10 September 1927 in Palazzolo Milanese, the first of eight brothers. After attending the Salesian Institute "Sant'Ambrogio" in Milan, he carried out the novitiate in Montodine (CR), made his first profession as a Salesian on 11 September 1943 and perpetual profession in 1949. Ordained a priest on 1 July 1953, he completed practical training in Varese and fostered a deep spiritual friendship with Domenichino Zamberletti, a little boy who died in the concept of holiness.

Destined for the house in Bologna, he obtained a degree in Literature and from 1959 until the end of his life he was in Chiari (Brescia), dedicating himself in the first years to teaching aspirants to Salesian life and then, over the years, more and more in the generous service to the poor, immigrants, prisoners, those who are hungry, those who have no homes, drug addicts, alcoholics, the mentally ill, and varied forms of material, spiritual and moral poverty. In the reception of very many people he exercises the ministry of listening, of consolation, of reconciliation and of exorcism.

He animates and takes care of the formation of the Salesian Cooperators, of the members of the ADMA, of the Past Pupils of Don Bosco and of numerous volunteers who collaborate in his charitable work. With the help of generous volunteers and benefactors, he founded the "Auxilium" reception center. With life and word he teaches us to discover and serve Christ in the poor, bearing witness to the love of the Good Shepherd.

This is how he presented himself: "I am but a poor priest ... It amazes me also that all the people afflicted by problems, sometimes unsolvable, turn to me ... Only with prayer, a very powerful weapon, with faith in the Madonna and her son Jesus, sometimes these problems are solved."

He concludes his earthly life on 12 June 2012, surrounded by a widespread reputation for holiness and signs. With the Cause of Fr Silvio Galli, the candidates for the holiness of the Salesian Family rise to 169.