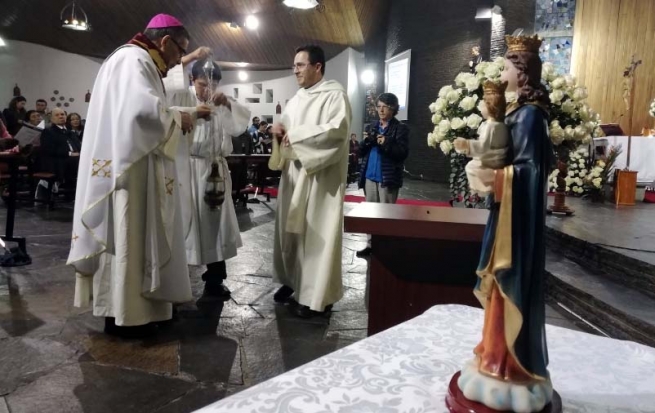 (ANS - Quito) - Before the month dedicated to the patron saint of the Salesians ended, on Thursday, May 30, 2019, Msgr. Alfredo Espinoza Mateus, SDB, archbishop of Quito and Primate of Ecuador, presided the Eucharist during which the parish of Mary Help of Christians in Quito was consecrated as a Diocesan Shrine. Hundreds of parishioners and members of the Salesian Family took part in the celebration.

One of the celebration's most emotional moments was the blessing of the statue of Mary Help of Christians and the site's incensation where it was placed, by Msgr. Espinoza, with the presence of Fr Romulo Sanmartín, SDB, parish priest. At the end of the enthronement rite, all those present welcomed with joy the representation of the Mother of God and Mother of Don Bosco in the new Diocesan Marian Sanctuary.

The center's history began in 1925 when the Salesians arrived in the "El Girón" quarter of Quito. Ten years later, on 2 June 1935, a public chapel dedicated to Mary Help of Christians was inaugurated. On 30 May 1957, Cardinal Carlos María de la Torre erected the parish of Mary Help of Christians. Later, on 28 November 1971, the present temple was solemnly consecrated, with the presence of Cardinal Pablo Muñoz Vega.

From the very beginning this church has attracted a large number of faithful, devotees of Mary. For this reason a formal request was made that it not only be considered a territorial church, but for it to become a church of Quito. On 3 April 2019, Msgr. Fausto Trávez, OFM, signed the decree of erection and the denomination of Diocesan Marian Sanctuary.

This new name of the Salesian church also implies new pastoral challenges for the community of Don Bosco's spiritual Sons and the lay people who accompany it, as it becomes necessary to care for the pilgrims who shall constantly visit and to make Mary Help of Christians known in the surrounding neighborhoods - especially given the large presence of schools, universities, public and private institutions.