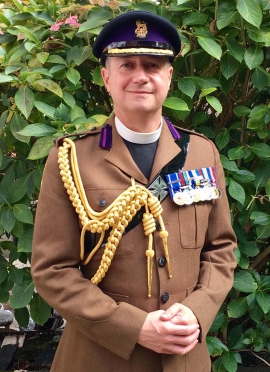 (ANS – Rome) – Father Michael Fava, the most senior Catholic Army Chaplain, has been awarded the CBE (Commander of the Order of the British Empire) in the Queen’s Birthday Honours. Fr Michael is a former pupil of Salesian College, Farnborough.

In November 2018, Fr Michael was appointed Deputy Chaplain General, the first Catholic to be appointed to this post.

Speaking of the Honour, Fr Michael said “I am stunned by this news, but very grateful for the acknowledgement that it represents for Catholic chaplaincy in the Army, and of the role of the Catholic Bishopric of the Forces. It is a tremendous honour to receive this on everyone’s behalf.”

He was commissioned into the Royal Army Chaplains Department in 1997. As well as serving in the UK and Northern Ireland he has served in Germany and Cyprus and served on operational tours of duty in Bosnia, Sierra Leone, Kosovo, and Afghanistan.

He was created an Honorary Chaplain to the Queen in 2017. He was Apostolic Administrator of the Bishopric of the Forces during the period ‘sede vacante’ May 2015 – Sep 2018.

Fr Michael is a priest of the Diocese of Portsmouth and an old boy of the Salesian College, Farnborough.

Bishop Paul Mason, Bishop of the Forces, said, “With over two decades in service as an Army chaplain, Fr Michael Fava has distinguished himself though his unique blend of dedicated professionalism and sensitive pastoral and priestly service. In receiving the CBE Fr Michael’s faithful commitment to his priestly vocation and his service as chaplain to the British Army are recognised and valued in a very important way. All of us in the Catholic Bishopric of the Forces are very proud of him and very happy to see him honoured in this way by the Queen.”