Brazil – Many prizes and awards for Salesians 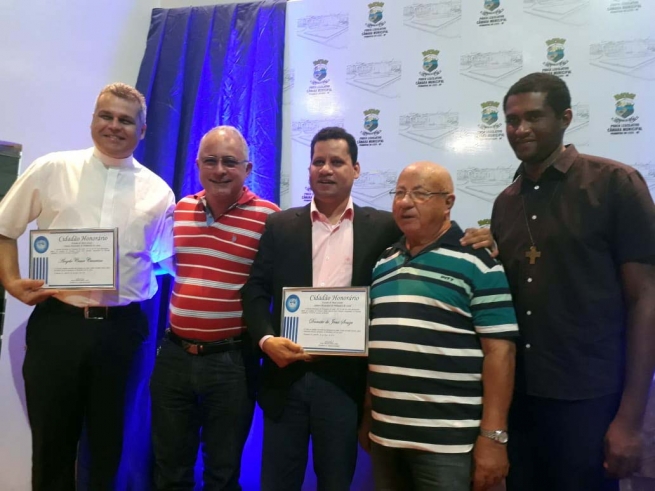 The title of "honorary citizen" was given to the two spiritual Sons of Don Bosco for their respective services rendered to local society in the care of children and young people, especially those most in need. As stated by the First Secretary of the Municipal Council of Primavera do Leste, Dr. Kinha Juriti, this tribute "is a way to thank and congratulate for all that has been done for the city; that, it is true, has only 33 years of history, but it must be considered that this is how a solid future is built."

Fr Cenerino is today pastor of the church of N.S. de La Salette and director of the Salesian community. “This title makes sense only thanks to the Salesian Mission that welcomed me 35 years ago in Araçatuba and has always given me the conditions and support for the realization of the mission, as a Salesian and as a priest who exercises the ministry in favor of the people of God, especially for young people," he commented.

The "maestro Damião", as he is known in the city, is the President of the Salesian Social Center, supported in collaboration by the Municipality, the Salesian Mission and the parish of N.S. de La Salette, and which has already contributed to changing the lives of about 5,000 people living in conditions of social vulnerability. The project currently serves around 200 children and adolescents between 7 and 13 years of age.

At the same time, Fr de Araújo Ramos, Pro-Rector of Pastoral and Community Affairs of the Catholic University of Don Bosco, and Fr Figueiró, Councilor for Diocesan Pastoral in Três Lagoas, were awarded the "Pope John Paul II" Prize by the Municipal Chamber of Campo Grande: a tribute to the Christians, religious and laity, who have distinguished themselves for the important works done for the benefit of the citizenship.

Fr de Araújo Ramos has held numerous posts in the service of Salesian higher education; while Fr Figueiró has recently developed the historical research "Cabreúva: from the secret to the prose", which has thrown new lights on the roots of Campo Grande.