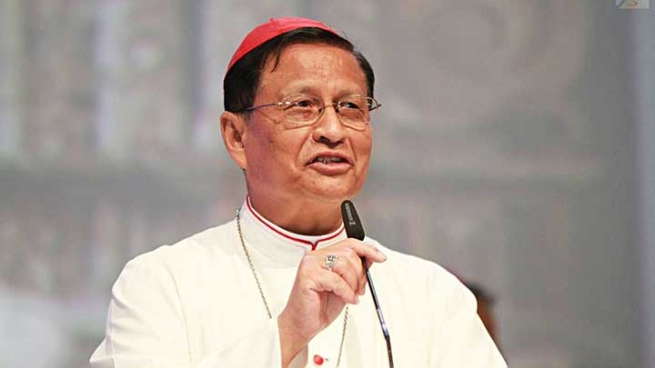 (ANS – Yangon) – A sorrowful lament, like a true pastor and a true citizen of Myanmar: it is the one launched by Cardinal Charles Maung Bo, Salesian, Archbishop of Yangon and President of the Federation of Episcopal Conferences of Asia, who observes with bitterness what Myanmar was and could be and the many evils that afflict her today. And yet, he reiterates, "peace is possible, peace is the only way." The following is the text of the cardinal's letter.

Myanmar, what a great past! She was once called Suvarnabhumi – the Golden Land. A land that was blessed with treasures above the ground and below the ground. Jade, ruby, gems, gold, amber, oil, gas, tin, zinc, marble and so many precious minerals! Myanmar has 50 percent of 'Golden wood' teak in the world. Majestic rivers that dance through the seductive fields, watering luxurious forests, fields that made Myanmar the rice bowl of Asia. Myanmar seemed to be a gift of an indulgent God who loved the Myanmar people with favouritism.

With all the great treasures, Myanmar is today one of the poorest countries in South East Asia. An ugly UN tag “least developed country” continues to mutilate her face. She begs for foreign investment. The World Food Program continues to feed her hungry. Like the blind beggar begging with the golden plate, Myanmar, once the envy of the world, waits for her foreign saviors to quench her thirst with almighty dollars.

We were once the envy of the world. In the 1950s and early 1960s, we were the rich nation in south East Asia. China was in ruins, war had raped Japan, Korea was scorching in conflict, Singapore was a squatter colony, Malaysia was wounding with her own insurrection.

Myanmar was the heaven, the richest country in South East Asia, boasting the best universities and a culture seasoned by quality education and an enabling of spiritual tradition. Her children were colourful, coming from 8 majestic tribes, with 135 sub-tribes. The riot of colours and dances of her people made Myanmar a scintillating beauty of rainbow nation.

This earthly paradise was mutilated into a virtual hell. 60 years of festering conflicts. Armed groups from every tribe! Irrawaddy River, the mother of all of us is the mute witness to rivers of blood that soaked the earth. The shopping list of mutual hatred and injustice is nauseating:

It is not late. Once we invest in hope and peace, we can return to the original Golden Land. I earnestly appeal to all those who believe only in the power of arms:

Sixty years war has brought no solution to anyone, only death and tears.

Peace is possible, peace is the only way. The gun has proved to be incapable of any solution.

The road to the Panglong Peace initiative is not perfect but it is a starting point. Give reprieve to the sound of guns, give peace a chance. Our conflicts are between siblings. Myanmar is our family. Peace is the gift we can give to each other to make it a blessed family. Peace and prosperity await this nation. No more days of hatred and war.

Let justice and peace flow like Irrawaddy River. Let true political and economic federalism, bring trust among communities. Let there be transparency. When the government ensures fairness through true participatory democracy, our wounds will heal, conflicts will become history. All armies can make their guns silent. Wage a war for peace. One army is enough and that army needs to be an army of justice and peace.

Myanmar has waited so long. Let us return to the Golden land.

Peace is possible, Peace is the only way.

Into that dream of freedom and prosperity, let my County awake.

Archbishop of Yangon and President of FABC