Syria – Syrian girl who "wanted" the war to continue 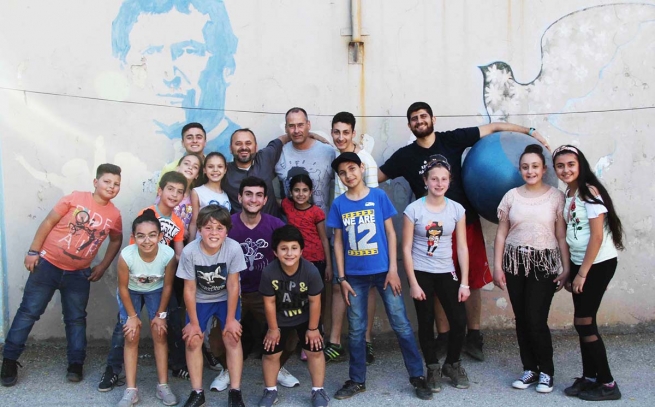 (ANS - Aleppo) - In these eight years of war, the Salesians have remained in the country along with hundreds of young people and their families in Aleppo, Damascus and Kafroun. "At the beginning of the war they did not understand that we would remain," recalls the Salesian missionary Fr Alejandro León, current Provincial of the Salesians in the Middle East. But the answer was always the same: "If the community to which God has sent me is my family, how can I abandon it when it needs me most?"

Everyone mourns someone who has died; many have lost what they had and most people have been forced to change residence or leave the country.

Reaching Syria and getting around the country is not easy. As in the case of most pandemics, many international organizations and NGOs left the country a long time ago. However, the Church, the Salesians have never left and continue to stand alongside the population.

The war has ended in the big cities, but there are still small pockets of conflict. The countless military checkpoints on roads and highways and the roar of aircraft and distant explosions continue to coexist with the thousands of cartridges and war relics that populate the fields and buildings in ruins.

In these years of war, every young person can narrate dozens of anecdotes of situations of risk, tension and uncertainty. "When we would say goodbye to our parents in the morning they tried to memorize how we were dressed in case of recognition ... Or they wrote their cell phone numbers on their (children's) arms in case something happened and we had to warn them," explains Biso Aghas, a young woman from Aleppo.

Majdoleen Alzukimi is 23 years old and has been attending the Salesian Youth Center in Damascus since she was seven. Her story is yet another example of all those that contain the pain and the trauma of war, but also the hope for peace and the future. Her father was recruited, like many others, for compulsory military service, and sent to the war front. "We saw him one day a week. In theory he was in a safe and close area, but the fear and concern for him always accompanied us," she recalls.

Neither her nor her family can forget March 21, 2018, the day of Mother's Day in Syria. A bomb that fell on Damascus killed her father and so the young Majdoleen must be the only person in Syria who says in tears: "I wish the war in Damascus would never had ended, because its end meant that my father is dead. If the war had continued, today my father would still be alive."