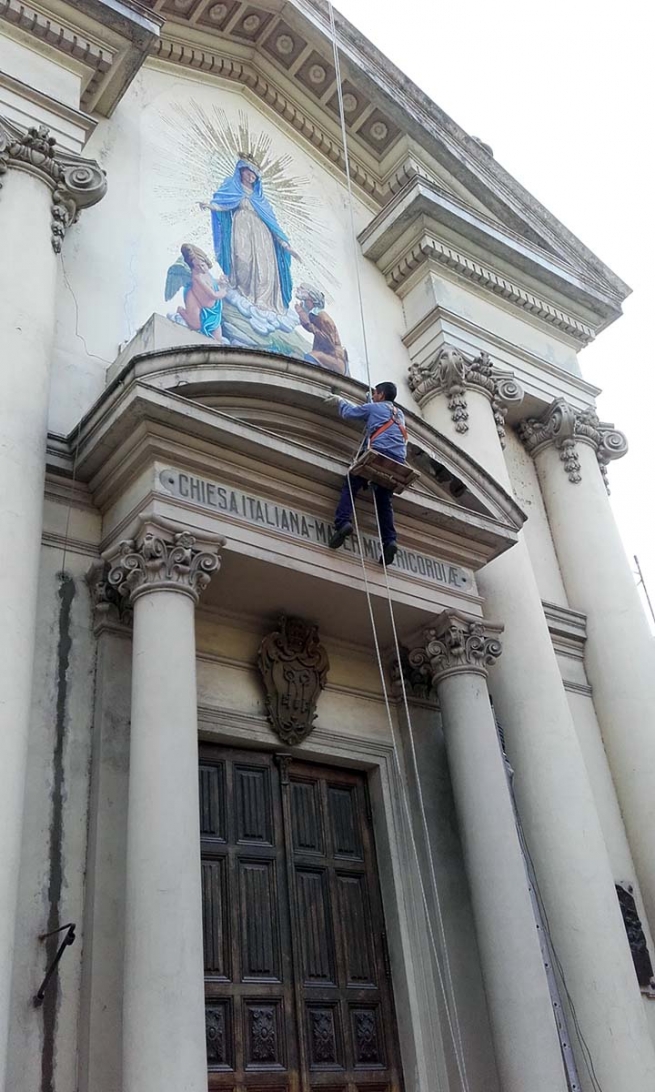 (ANS - Buenos Aires) - On the afternoon of 11 November 1875, in the Church of Mary Help of Christians in Turin-Valdocco, there was a big party and an emotionally moving farewell: it was the sending of the first ten Salesian missionaries to Argentina, who over a month later, on December 14, 1875, reached their destination. The "Mater Misericordiae" church of Buenos Aires became the place of arrival of the Salesian missionaries and of all the Italian immigrants "at world's end". In view of the VIII International Congress of Mary Help of Christians, to be held in Buenos Aires from 7 to 10 November 2019, work began on the church's integral waterproofing and restoration.

The work, made necessary to protect the walls worn by humidity and infiltrations, started as early as the end of April. "On Saturday 18 May, as a gift from the Help of Christians, we moved, for the second time in history, the venerated statue of Mater Misericordiae, which welcomed the first missionary pioneers of 1875. For the long-awaited restoration, it was transferred to Mendoza," reported Fr Mariano Erra, SDB, Rector of the Church.

In the second half of the nineteenth century, two churches concentrated the attention of Italian immigrants in Buenos Aires: the church of San Giovanni Evangelista, a building from 1872 in the district of La Boca; and the church "Mater Misericordiae", from 1870. The latter, located in Via Moreno 1687, was the first place where the Salesians had their home when they arrived in Argentina in 1875; subsequently other enlargements, renovations and land acquisitions were carried out. Today it is part of a Salesian complex that also houses the parish, school, oratory and other initiatives.

The temple was inaugurated in 1870 based on a project by prof. Emilio Rosetti (1839-1908), engineer and mathematician born in Forlimpopoli. Noteworthy in this church is the High Altar, whose design is by the famous Turin architect Carlo Ceppi, a source of inspiration for several churches for another famous architect, Virginio Vespignani.

"The statue placed in the altar of our beloved Mother is in carved wood and is a replica of the image that is found in the Sanctuary of the Madonna della Misericordia in Savona, by Antonio Brilla," the church officials explain.

The ancient pipe organ can be considered an artistic relic, the work of the "Vegezzi Bossi" company, and it arrived there at the request of Msgr. Giovanni Cagliero, SDB, who was at the head of the first Salesian missionary expedition and also known as a talented composer.

Finally, the “Mater Misericordiae” church boasts a famous relic of Don Bosco from 1929, a gift from Fr Filippo Rinaldi, III Successor of Don Bosco, to Pope Pius XI, which will be exhibited on the occasion of the VIII International Congress of Mary Help of Christians.

As the leaders of the church that welcomed the first Salesian missionaries observe, "the restoration work wants to be a gesture of gratitude towards the Mother of the Salesian missions in Argentina."