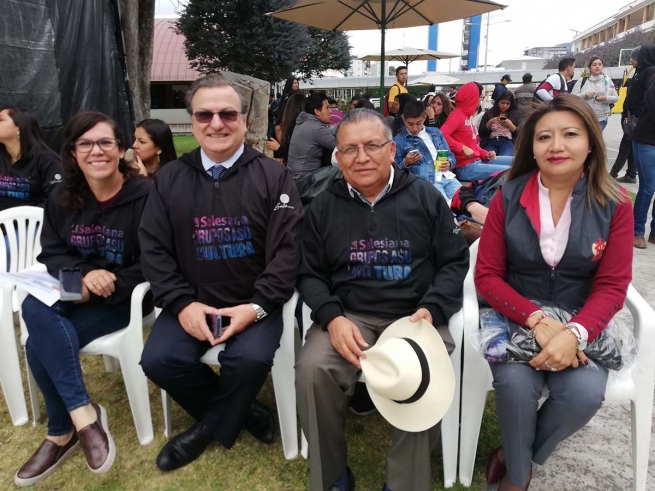 (ANS - Quito) - The Salesian Polytechnic University of Ecuador (UPS) celebrates 25 years of institutional life in 2019 with a Cultural Caravan started last June 18 at the Quito site. In a festive atmosphere the entire university community gathered to enjoy music, traditional dances, dances and theater, of which the young people of the various groups of the Salesian Association of Universities (ASU) of Ecuador were protagonists.

The central idea of ​​this celebration lies in the consideration that culture has always been a fundamental pillar of Salesian pedagogy. "A Salesian house without music is like a body without a soul," said Don Bosco. For this reason several groups have been formed at the UPS, which become real spaces for the most varied artistic-cultural events, themselves an integral part of personal and professional formation.

From a historical point of view, this Salesian institution of higher education was born on August 4, 1994, and began to work with about 800 students from the Faculties of Electromechanics, Human Sciences, Social Sciences, Livestock, Agro-industrial, Technical, Administrative, Engineering. and Religious Sciences.

Currently the UPS of Ecuador is the Salesian institution of higher education that hosts the largest number of students in the world (24,500).  In 2019, for the first time, it entered in the ranking of the top 100 universities in Latin America, of the 4,000 in the region. Currently, in its three sites (Quito, Guayaquil and Cuenca) it features 27 degree courses and 10 doctorates, 62 research groups, 10 educational innovation groups and 98 ASU groups.

Also present at the inauguration of the Cultural Caravan was Fr Francisco Sánchez, Salesian Provincial in Ecuador and Grand Chancellor of the UPS, who said on the occasion: "These 25 years of service to young people are an expression of our Salesian vocation ... It is here that we try to recreate a youthful environment where every boy can develop his qualities and qualities not only academic, but also human."

The Provincial also gave a message to students, reminding them that they are the protagonists of Don Bosco's educational proposal and that the Salesians and lay educators will always be ready to accompany them and stay close to them in what concerns them, because what they want is that they become transformative agents of society.

Another of the authorities present was Dr. José Juncosa, Vice-Rector of the Quito office, who underlined the growth of the institution because, he said: "In this time that has passed. we have become much more university students, much more polytechnic, much more Salesian." He then also invited all those who belong to the university community to adopt the concept of "good Christian and honest citizen" that Don Bosco himself delivered.