RMG – A moment of gratitude at feast of Rector Major 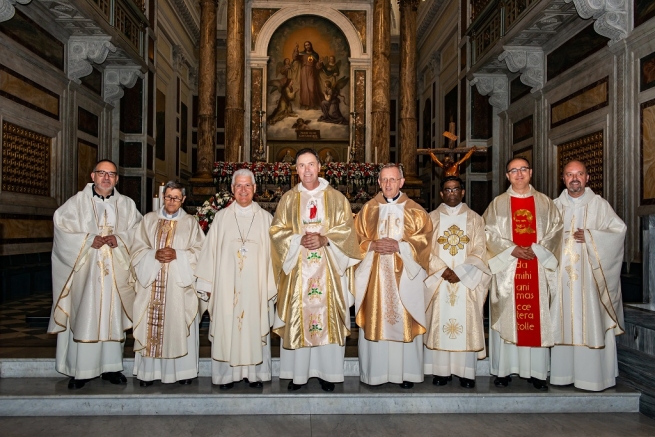 (ANS - Rome) - The future saint of the young was just one day old, on that 17th of August 1815, when his parents Francesco Bosco and Margherita Occhiena brought him to be baptized, with the name of Giovanni Melchiorre. "At Valdocco various festivals were organized with solemn liturgical functions, rich poetic-musical academies and illustrious guests ... In Turin the feast of St. John the Baptist (June 24) was the patronal feast of the city and of the diocese, celebrated even with a cannon shot and the blank shots of the troops' rifles," writes the Salesian historian, Fr Francesco Motto. "The young people of the very first Valdocco oratory began that day to celebrate Don Bosco and offer him flowers, believing it to be the name day. Don Bosco let him do it and did it all his life." So now this feast has become a heritage of the history of Don Bosco's Successors.

During the homily of the Mass celebrated yesterday, June 24, for the feast of gratitude to the Rector Major, Fr Ángel Fernández Artime said: “On the feast of Don Bosco and on the feast that we celebrate today for the Rector Major, the first thing I must to do is to give thanks to each one of you, because nothing can be done without the presence of you lay people and Salesians ... Without the silent and hidden service, it would not be possible to reach the whole Salesian world. Your work is something transcendent, many times we do not know where your work and your message arrive ... Today it certainly becomes a moment of gratitude."

In a very significant way he then indicated to all: Fr Francesco Maraccani, for the 65 years of Religious Profession; Fr Luigi Fedrizzi, for 50 years of ordination; and then, for the "Silver Jubilee" of the 25 years of ordination: Fr Stefano Martoglio, Fr Francisco Santos, Fr Horacio López, and Fr Saimy Ezhanikattu.

Also present at the celebration was Msgr. Alberto Lorenzelli, Auxiliary Bishop of Santiago de Chile, who offered the Rector Major a beautiful reliquary with a first class relic of Don Bosco, "so that, in the Salesian Central Headquarters, Don Bosco will always help us to love God and the young people to whom we are sent."