Chile – Lay person's role in Church today: you, what do you have to say? 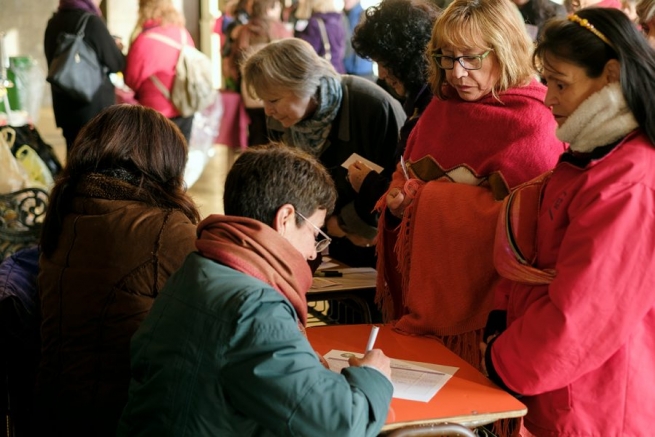 (ANS - Santiago) - There is no doubt that the question of what the role of the laity in the Church today is remains a theme currently much in vogue for various reasons; for the scarcity of clerics, or for the more significant presence and the rediscovery of the laity in the mission of the Church. For this reason on Saturday, June 22, about 100 people, belonging to different groups of the Salesian Family, gathered in the auditorium of the "Salesianos Alameda" educational center in Santiago, and participated in the debate entitled: “The role of the laity in the Church of today”, conducted by the well-known theologian Antonio Bentué.

The lecturer, Associate Professor of the Faculty of Theology of the Catholic University of Chile, focused his discourse starting from a sentence of the letter sent by Pope Francis to the people of God in Chile, where he writes: "the Church needs that you do the identity card of adults, spiritually speaking adults, and have the courage to tell us how you feel and what you think."

For prof. Bentué, the Holy Father's letter was an appeal to be unafraid, because the times of crisis that the Chilean Church is experiencing can be a sign to return to the essence of Christianity.

Regarding the role of the laity, the theologian said that the main question we must ask ourselves is: "How coherent were we with the magisterium of the Church?" He also emphasized the great fraternal responsibility that the laity have in helping "consecrated brothers" to carry out their pastoral work.

"I believe these comparisons and debates are an incentive to continue the commitment to take on our true role as lay people. I think there is a lot of work to do, but people are increasingly involved. If everyone does their part, we can make things better," said Rocio Olivé, of the Salesian Family group  Cancão Nova."

For Manuel Poza, permanent deacon of the “San Giovanni Bosco” parish, the initiative was positive and what was presented by prof. Bentué is in tune with what the Holy Father wants: "That the laity do not have so much dependence on priests and at the same time there is real collaboration between the two groups. The laity are eager to propose ideas to improve our Church and our relationship with consecrated persons."

The meeting had a second moment in which those present were able to ask questions to prof. Bentué. At this stage, other very important topics were debated, such as, for example: "What do we do with education to the faith?" "What is the essence of Christianity", and "When did we leave Jesus outside our church?"