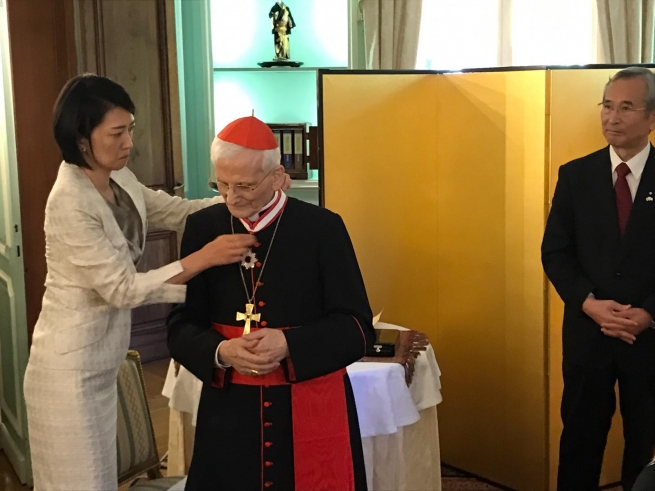 (ANS - Vatican City) - During an emotionally moving ceremony held yesterday, Thursday 27 June, at the Japanese Embassy to the Holy See, the Salesian Cardinal Raffaele Farina, archivist and librarian emeritus of the Holy Roman Church, was awarded the Order of the Rising Sun, gold and silver star, conferred by the Emperor of Japan.

Card Farina was awarded for his "contribution to the strengthening of friendly relations between Japan and the Holy See."  Among the specific motivations of the honor mention was made of his precious work in favor of the "reorganization of the historical documents of the Edo period collected by the Salesian missionary Fr Mario Marega", that is related to the period of prohibition of Christianity in the Japanese region of Bungo.

It is in the "Edo period" (1603-1868), in fact, that the Tokugawa family reached the phase of maximum political-military power, which corresponded to a policy of isolation during which there were real carnages of Christians, above all in the Nagasaki area.

The reorganization of those documents is of immense value, because it allows framing the Christian presence in Japan from the very beginning (the oldest text collected by Fr Marega even reports the arrival of Christianity in Japan, in 1549) and then in the periods of the "kakure kirishitan" (hidden Christians).

In his thanksgiving speech for the awarding of such a fine honor, card. Raffaele Farina listed several episodes that linked him to the world of Japanese culture and spoke of some important Japanese figures with whom he has developed ever closer relationships over the years - including, first and foremost, comm. Tatsuro Takatsu, great benefactor of the Salesian Pontifical University.

Furthermore, he also mentioned what he said in 2013, in the presence of the Emperor of Japan, on the occasion of the Centenary of the Sophia Univiersity of Tokyo: “I spent my life in teaching and above all in the direction of a University; I dealt with Libraries and Archives, but also with Cultural Institutions, the environment where the happy synthesis between science and art takes place, between the search for truth and beauty. I experienced how science, knowledge, culture and art constitute a bridge between different cultures, religions and nations: a bridge of friendship and peace that helps peoples to understand each other, help each other and make international coexistence more humane.

In this light, I would like to tell you that I am happy to be here withyou and to profess to you with simplicity and sincerity that I love Japan and admire the Japanese people.”