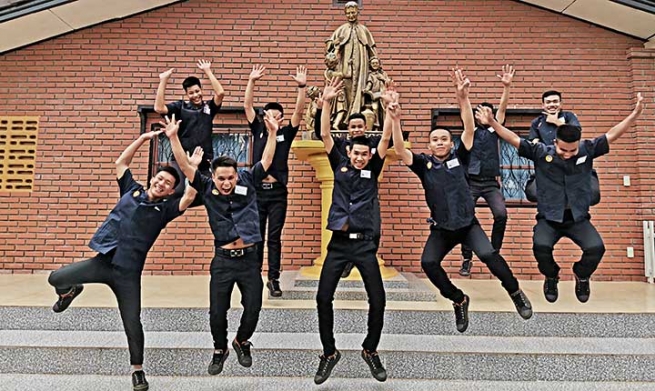 (ANS - Vientiane) - On 26 June last, Fr Dheparat Pitisant, Provincial of Thailand (THA), Fr Patrizio Maccioni, Director of the Don Bosco Vocational Training Center, and Br Carlo Bacalla, SDB, participated, as Salesian representatives, in the evaluation meeting for the renewal of the agreement with the Department of the Revolutionary Youth Union of Laos. The latter was represented by Biya Yathotu, head of the Department, and by Boonta Theppawong, Vice Secretary. Numerous representatives of the Department for Education and Foreign Affairs were also present at the meeting.

The purpose of this meeting, which was held at the Don Bosco Vocational Training Center, was to reflect together on what has been done and how much remains to be done in the current five-year term, namely 2016-2021. The meeting took place in a climate of friendship and cooperation and with a single goal: to do good to young Laotians.

"The intentions of the Department of the Revolutionary Youth Union of Laos and of the Salesian Congregation are in agreement. We want to help poor and disadvantaged young people," Fr Dheparat Pitisant declared. "The Salesians are trying to do their utmost for these young people; we take care of them. But to do this, we need the support and cooperation of all government departments," he added.

The Thai Province, on which the Salesian presence in Laos depends, signed a first collaboration agreement in 2008 with the Revolutionary Youth Union of Laos - the youth wing of the Revolutionary Party of Laos, which governs the country. The second agreement, which sanctioned the renewal of the collaboration, was in 2010, and now, after this third signature, a third period of collaboration is underway.

The work of the Salesians in Laos began on May 24, 2004, under the guidance of Fr Tito Pedron. The Spiritual Sons of Don Bosco began their work simply by repairing small vehicles: an activity that was carried out by 5 young Laotians who had studied at the Don Bosco Technological College in Bangkok, Thailand.

Later this work was expanded and turned into the Don Bosco Vocational Training Center, in its current location. The house canonically was erected on January 17th of this year.

Currently, the center has developed different disciplines with courses for electricians, car and motorcycle mechanics and welding; in this first school semester of 2019, it is attended by 98 boys.