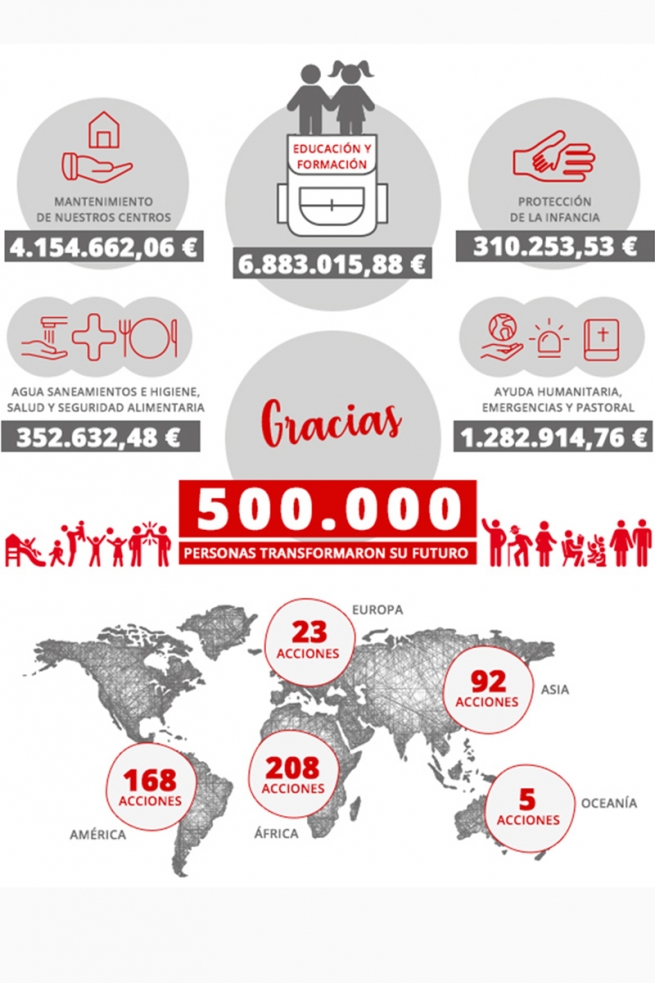 (ANS - Madrid) - Betty is 14 and is trying to escape the dangers of the streets of Freetown. To survive, for years she has prostituted herself, but today she can count on the help of professionals working alongside the Salesians of "Don Bosco Fambul". Betty is one of the girls that "Misiones Salesianas", the Salesian Mission Office of Madrid, accompanied in 2018. Like her, about 500,000 more people managed to change their future in 2018, thanks to 496 initiatives undertaken and implemented in 69 countries of the five continents.

Last year, "Misiones Salesianas" allocated more than 7 million euros for the education, training and protection of the most vulnerable young people, children and girls. For Don Bosco education was the fundamental key for children and young people to get out of situations of poverty and moral degeneration. For this reason his sentence is famous: "If a young person is well educated, we will have moral order. Otherwise, vice and disorder will prevail." The Salesians of Don Bosco in the five continents know that education is the masterpiece that will benefit young people themselves and societies and "Misiones Salesianas" has placed it as a fundamental pillar to fulfill this dream.

In the realization of its programs "Misiones Salesianas" has dedicated over 350 thousand euros to projects for the health of the population, water, sanitation and food security; and more than 380 thousand euros have been used for emergencies and humanitarian aid in countries such as Venezuela, South Sudan, Kenya and Lebanon.

Furthermore, the Salesian Mission Office of Madrid is committed to the pursuit of the Sustainable Development Goals (OSS), to build a more just world for all. "OSS 4, which refers to quality education, is one of those that challenges us in a particular way and to which we feel especially called," explains Fr José Antonio San Martín, SDB, Director of the organization.

All this would not have been possible without the collaboration of over 41,000 benefactors, people who share the dream of creating a better world, especially for the most disadvantaged children and young people. To these thousands of collaborators, the staff of "Misiones Salesianas" can only address a much-felt: "Thank you!"

"We are satisfied with what has been achieved. But there are still many challenges to be faced: over 800 million people in the world suffer from hunger, 158 million children are not yet in school, 70 million people have had to leave their homes …," adds Fr San Martín.

Why the Salesian Mission Office in Madrid continues to work so that anyone in need, especially children and young people, can make a change in their future.