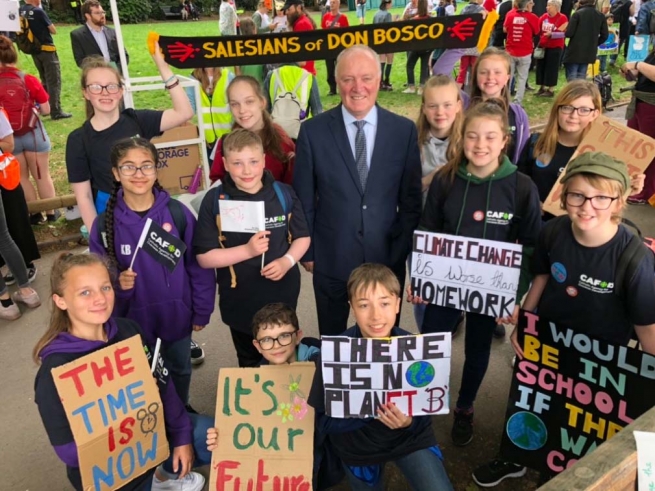 (ANS - London) - Students from Thornleigh Salesian College, Bolton, featured in the BBC news, when they attended “The Time is Now”, a march and lobby at the seat of the UK government in Westminster, London, calling for our politicians to act quickly on climate change. The event, on 26th June, was organised by several groups including CAFOD, and thousands of people took part.

At school, the group had been exploring how Catholic teaching urges us all to care for creation, and to be aware of the severe impact the climate crisis has on the poorest societies in the world. They prepared for speaking to their Member of Parliament, Sir David Crausby, MP for Bolton North East, and opened communication with him ahead of the event, creating green hearts which the RE department sent to Sir David’s office. He tweeted in response, “Students from @tsc_re recently sent me green hearts to show support for ambitious action to tackle climate change. We’ve used some of them to decorate my Bolton office to keep this issue at the front of our minds.”

At Wednesday’s event, the students were filmed by the BBC’s Newsround programme, a news show especially for young people, talking about the reasons they had gone to London. One young man expressed concern for the animals around the world who suffer as a consequence of climate change, and another student said she wants to see a world where people have equality, and “nobody is hurt by the things we can change”.

The group met the Bishop of Salford, the Right Reverend John Arnold, who stopped by to say hello and to thank them for using their voices in support of the earth and the poor.

Newsround also filmed the Thornleigh students as they told Sir David Crausby about their concerns for the environment their generation will inherit. Taking the Newsround mic, a student got the chance to interview the MP for the national television audience: “If I was to say to you that politicians are not doing enough about climate change,” he asked, “what would you say?”

Sir David said this was probably right, but he also pointed out that solving climate problems for future generations does not rest solely with politicians, “It’s all of the people working together and demanding a better deal that will change the world,” he said.

These compassionate young people are certainly leading the way for us in bringing about that change.

After the hard work of campaigning for our common home, there was time for some sightseeing around Westminster and Whitehall, and the end of the day, the group attended Mass celebrated by Bishop John, before getting on the coach back to Bolton.

Once everyone was safely home, Thornleigh’s RE department tweeted: “We could not be more proud of this bunch today! Now begins the work of encouraging others to join us in our work to protect God’s creation, our common home!”