RMG – A new life begins for the Salesian House of Maynooth, Ireland 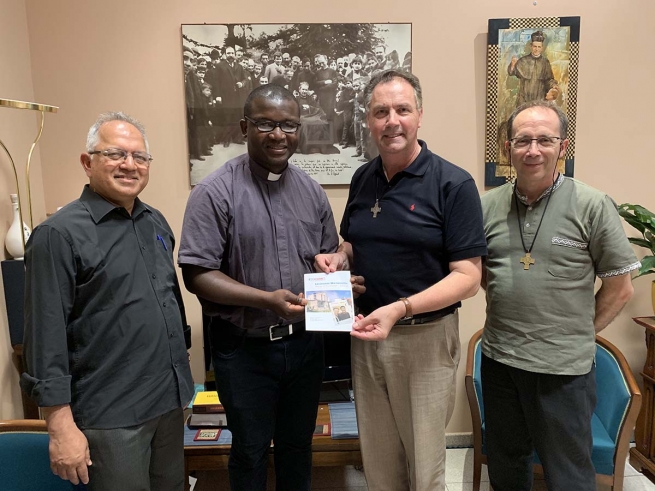 (ANS - Rome) - One of the initiatives which the Salesians of the “Saint Patrick” Province of Ireland (IRL) have undertaken for this 2019 - a year celebrating the centenary of their presence on the island - concerns re-establishing the Salesian House of Formation in Maynooth. For this reason, Fr Cyril Odia, first Rector of the new Formation community, went to Rome and on Monday, 8 July, presented the Rector Major, Fr Ángel Fernández Artime, with a copy of the brochure illustrating the new program of formation. Also present at this meeting were Fr Ivo Coelho, General Councilor for Formation, and other members of his formation team.

Located in the heart of a university campus, the Salesian community of Maynooth, officially called "St Catherine's Centre", has for years been a living presence of Salesian animation, providing numerous activities and proposals to university students. Now, however, St Catherine's Center will serve as a Centre for Salesian Formation and Studies to meet the needs not only of Irish Salesian vocations, but also to help the formation of young foreign Salesians who come to the IRL Province as part of Project Europe.

The Rector Major is familiar with the Saint Catherine Centre, having visited last February for the Centenary Celebrations. Welcomed by numerous students and by the Salesian community, he was thus able to experience “the beautiful climate” in person, which is created where the interaction between Salesians and young people reflects Don Bosco's founding experience of a religious life lived in the midst of the young.

The Maynooth campus - where the Salesian center is located - serves two renowned universities: “St. Patrick’s College”, an internationally renowned Pontifical University, and the “Maynooth National University of Ireland”, today acknowledged as one of the leading new universities in the world. This makes it ideal for Salesian confreres in initial formation who will reside in the immediate vicinity to their lecture halls. Moreover, the campus has a clear international character with so many foreign students enrolled making it also accessible to other Salesians from Europe and beyond.

This venue is also strategic because it also offers many opportunities for apostolic activity by Salesians in formation towards young university students: the community is in regular contact with the students on campus through the common room, and also takes care of the chaplaincy of the large local secondary school. Finally, the Salesian community of Maynooth is involved in the local parish and in the animation of different groups.