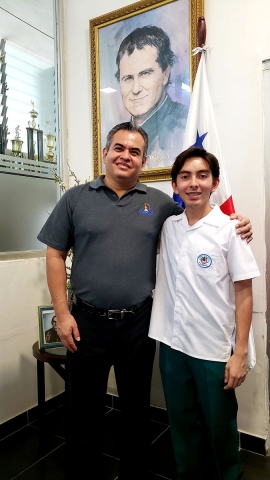 (ANS - City of Panama) - Santiago Corrales Rodríguez, a last year student of the Don Bosco Technical Institute, was invited as a representative of Latin America to participate in the High Level Political Forum (HLPF) organized by the United Nations (UN) in New York from 9 to 18 July 2019.

The HLPF is an annual meeting promoted by the UN to evaluate the progress made year by year by different countries in pursuing the Sustainable Development Goals, among which there is certainly, among the most important, the conservation of the environment.

At this time the young Santiago has the opportunity to participate in a round table with young Salesians, representing Europe, Africa and the Pacific Islands, whose central theme is "Youth Aspirations & Climate Urgency."

From 2018 the Don Bosco Technical Institute (ITDB) of the City of Panama is part of the "Don Bosco Green Alliance", the international Salesian organization that has the task of supporting and fostering the projects developed by young people for the conservation of the environment in the cities where they live. The Salesian school has been chosen by the United Nations to represent the young people of the Latin American region at the HLPF by virtue of the work done through the "ECOClub ITDB", which promotes the recycling of waste; moreover, the institute is supported by the entire citizenship, since it is the only school in the country that functions as a center for the collection and optimization of recycling.