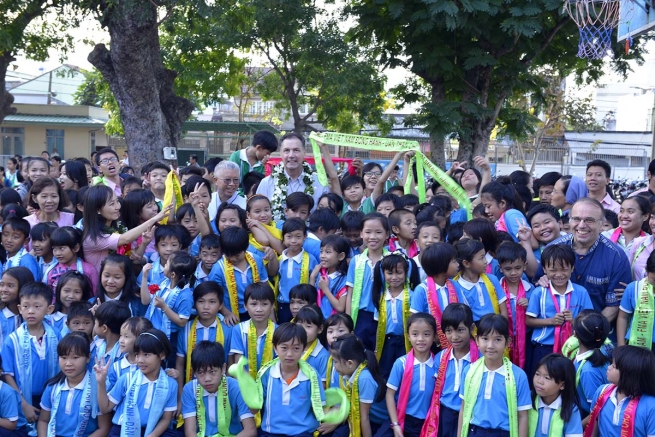 (ANS – Rome) – Two years after the memorable visit of the Rector Major to the VIE province of St. John Bosco (Vietnam-Mongolia) in 2017, the Tenth Successor of Don Bosco approved the establishment of the Vietnam North Delegation in the General Council session on 10 July, in accordance with art. 156 of the SDB Constitutions. After the Mongolia Delegation (established in 2009) this is the second Delegation depending on the Provincial of Vietnam-Mongolia.

The main motivation for the establishment of the new Delegation is a more effective charismatic animation of the Salesian mission. especially for poor young people. The second motivation is our contribution to the local Church (7 different dioceses in the northern part of Vietnam) and also the difficulty of the significant distance from the provincial house (1500 km) where the majority of the 33 communities are located.

According to the Decree of the Rector Major, the Delegation comprises the 10 local communities of Cat Dam, Duc Ninh, Duong A, Hoa An, Ky Anh, Lao Cai, Ngan Son, Quang Nap, Trai Giao and Van Phuc. Currently there are 43 Salesians (9 Salesian Brothers, 32 Salesian Priests and two practical trainees) who will be part of the Delegation. Fr. Tran Quoc Tuan (Thomas Aquinas) has been appointed as the first Delegate Superior-Provincial. He will lead and animate the confreres with his 3 member council (Economer, Youth Ministry delegate and Councillor).

The Delegation comprises 4 canonical and 6 non-canonical communities. Most of the Salesian works are parishes with a daily Oratory - Youth Centre, while two of the communities are also ministering to ethnic minorities and marginalised youth. Since the territory in North Vietnam is a cradle of the Vietnamese Catholic Church from the 16th century, the Delegation will invest its energy in a dynamic vocation ministry.

Beyond the other four Delegations in the EAO region (AUL-Pacific, FIS-Pakistan, THA-Cambodia and VIE-Mongolia), there are another 6 Salesian Delegations in the other continents: PLE-Bielarussia, AFW-Nigeria, AFE-Sudan, AFO Senegal, Mali, Guinea Conakry and Gambia - a total of 10 Delegation in the entire Congregation. Each Delegation has its own Statutes (art. Constitutions 156 or 159) approved by the Rector Major and is an integral part of the respective province.

The new Delegation will be officially open in early September at the beginning of next school year 2019-2020.