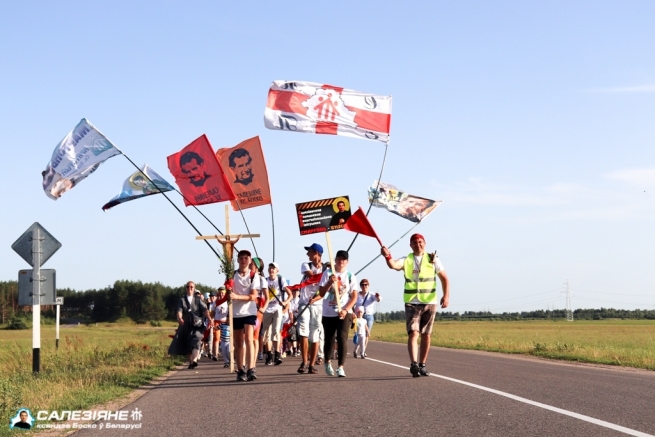 (ANS - Budslau) - This year the traditional Salesian Evangelization Youth Pilgrimage (SMEP, in Belarusian) which went from Smorgon to the Marian Shrine of Budslav reached its 20th edition and was therefore celebrated with special attention. In the six days of walking, from 30 June to 5 July, more than 130 young pilgrims commemorated the origins of this journey and prayed for those who gave life to this beautiful tradition; before departure they had even collected memorabilia, testimonies and photographs of previous editions.

The theme that guides the SMEP every year is the motto of the Rector Major's Strenna. Hence, this year, the reflections were dedicated to the theme: "Holiness for you, too." They were guided by the new Salesian priest Arthur Lyashnevski who, in his meditations, dealt with the theme starting from the parable of the seed tossed onto the good earth. In accompanying the young, on the road and with his words, the Salesian often presented examples from his personal and family history, something that the pilgrims especially enjoyed as they could see what it means to engage in a journey of holiness in everyday life.

Furthermore, each day of the pilgrimage had a specific patron saint, chosen among the figures of holiness of the Salesian Family, whose image led the journey, and to whom the requests for intercession for that day were especially addressed.

"We cannot fail to notice the enormous contribution of young people to the pilgrimage. Several teams of animators were responsible for the activities of each day: moments of prayer, relaxation, singing, animation, respect for the timetables …," the organizers said.

Organizers and young people together, with the fundamental contribution of the Salesian Cooperators, also prepared open working groups in which the pilgrims could discuss and explore a certain issue: to know more about the patron saint, to reflect on the Holy Scriptures, to discuss holiness, sing, play or share their impressions on social networks.

And, as usual, on the last day, all the pilgrims together participated in an exciting Via Crucis.

Among this edition's novelties was the participation of a group of young people from the Salesian oratory in Moscow; also an increasingly appreciated and typical aspect is the great response of the population of the villages that the SMEP cross - for whom the energy and youthful enthusiasm represent a great impulse to the life of faith - and the spirit of service and evangelization proper of young people in Salesian circles.